Kindly Share This Story:
A major fallout of the one-day training in media practice which held at the Protea Hotel in Central Business District of Ikeja, on Thursday was the inauguration of an excellence award for media practitioners 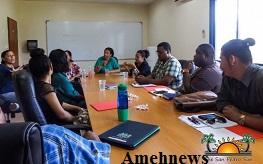 The organisers have already set up a steering committee to fine-tune modalities for the maiden edition of the awards, expected to hold in the first quarter of next year.
The workshop organised by nigeriansafari.com, an online website and Tan Solido Global Concepts Limited, ran under the theme: Journalism Excellence in Challenging Times”.
Participants had raised issues about the quality of journalism practice lately , submitting amongst others, the need for constant training and retraining as well as recognition of outstanding performance in the different realms of practice.
Following their submissions and pleas, and as way of encouraging professionalism, the organisers agreed to setting up a steering committee to work out modalities for an excellence journalism awards to coincide with the workshop.
Cami Ezenwa, who spoke for the online site, said the idea was to bring stakeholders together to discuss basic challenges and seek ways out.
He advised the participants to maximise the opportunity as it would mark a turning point in their lives and careers.
Speaker after another agreed that the profession was tiding through unusual currents and that practitioners needed to be at their best in order not to sink.
Jide Johnson, the Deputy Provost of the Nigerian Institute of Journalism (NIJ) who gave the key note address, began by identifying training and attendance to workshops as part of the basic principles that bake excellence, bemoaning however, that many practitioners today do not prioritise training.
He advised against this, enjoining those in attendance to maximise the opportunity as they would need the lessons in the future.
Dcn Jackson Akpasubi, formerly an Editor in the defunct Concord Newspapers, The Guardian, erstwhile News Editor at TVC and currently publisher of Globe online newspaper, acknowledged the innovations that technology had brought into practice, expressing concern however that it had tended to make some journalists to be laid back.
Akpasubi said the possibility of reporting from the comfort of the home or anonymity of an online platform had brought its drawbacks, like the lack of creativity, while many bloggers, with little or no time for research, publish un-authenticated stories.
He also questioned the lavish use of pictures that have nothing to do with the story, adding that journalists should make their audiences know the difference between fake and real stories.
“The consuming audience does not care what pressures or challenges you face, all they want is get authentic and genuine information”, he said, adding that this called for the journalist to do more
Former Secretary of the Nigeria Union of Journalists (NUJ), Lagos State Council, Sylva Okereke, who spoke around the theme: “How Journalists can make it in challenging Time”, threw a lot of posers to stir up his audience.
He drew a demarcation between the early journalists, whom he said were possessed by the writing and reporting passion and the current breed of journalists, submitting that since a journalist has family obligations, he should also be concerned about fulfilling those obligations.
He referred to sayings that success is not by a sudden flight, but toiling and burning of the midnight candle, affirming that the journalist who wants to make it must have a properly laid out plan.
Okereke, who currently works with the National Mirror newspaper,  submitted that the today’s journalist desiring success should be  broadminded, dogged, have nose for news, be versatile and have a hunger for exclusives.
He said the fact that journalism jobs appear to be dwindling while journalism graduates are being churned out daily, requires that the journalist looks inwards to remain relevant.
The average practitioner could discover additional streams of income like stringing, acquisition of additional skills and setting up offices in allied areas like photo studio and media buying, Okereke said
He also underscored attendance to seminars, conferences and workshops as a way of improving one’s skills.
Many of the participants, in their contribution, expressed appreciation to the organisers submitting that the workshop had opened their eyes and strengthened their resolve.