Through the Association’s President has rejected the 80 percent waiver proposed by aviation cargo handling companies to clearing agents operating at the nation’s airports. 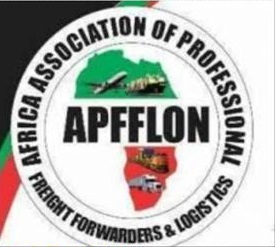 The President of African Association of Professional Freight Forwarders and Logistics of Nigeria (APFFLON), Otunba Frank Ogunojemite in a letter to the Senate President, Sen. Ahmed Lawan, Minister of Aviation, Sen. Hadi Sirika, the association said charging demurrage by the handling companies was an act of disobedience to the federal government which ordered a nationwide lockdown to curb the spread of Coronavirus.

He said, since the lock down was a Federal Government directive, clearing agents at the airports should not be punished for obeying the directives.

The letter reads: “The Federal Government of Nigeria at the inception of lockdown against COVID-19 Pandemic ordered that businesses all over Nigeria should be shutdown, including operations at the ports, besides essential businesses and services”

“As usual with the handlers, NAHCO and SAHCO, they have again flagrantly disregarded and disobeyed the directive. The two bodies have been operating and they are informing people whose consignments are with them to come forward to pay ground rent of 100% when there is no operation due to the lockdown, what then brings about the issue of demurrage? With so much pressure and protests from the industry’s stakeholders, the two handlers have decided to peg the same rent to 20%.”

He further accused the handling companies of going ahead to increase handling charges despite the increment being challenged in a court of law.

“These two bodies are fond of adding to the economic hardship of Nigerians. As a matter of fact, our association is in court against these two (NAHCO and SAHCO), over handling charges which they intend to ‘jack up’ to an arbitrary 70%. Even as the matter is still in court, the two reduced the charges to 40% and implement same contrary to the avowed belief and doctrine ‘that when a matter is sub-judicial, all form of self-help should cease’. NAHCO and SAHCO have contemptuously done the unthinkable ditto this pandemic lockdown directive”.

The group told the Senate President that: “We expect the FAAN, NCAA and your good office to check to compel the handlers to comply with the federal government order/directives”.