…As Jamoh Charges Media on Awareness

The Director General, of Nigerian Maritime Administration and Safety Agency (NIMASA) Dr. Bashir Jamoh has presented a number of medical equipment and items including ventilators, Ambulance, buses and response vessels to Lagos state Government towards the fight against the spread of COVID 19. 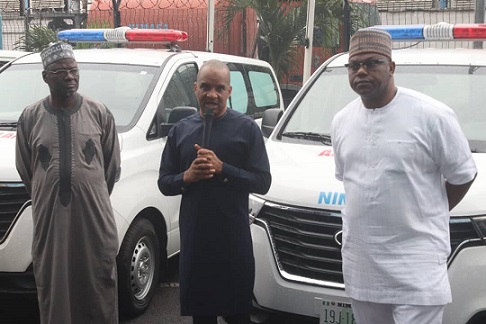 While presenting the items to the Governor of Lagos, Dr. Jamoh stated that the Agency felt it necessary to make the donations to Lagos as the state remains the epicentre for the virus in Nigeria. He commended Governor Babajide Sanwo-Olu for being proactive in his response to the pandemic.

“I want to commend Mr. Governor, for his exemplary leadership in the management of this pandemic, we as a regulatory Agency felt it was necessary to support the state as responsible tenants of Lagos and we hope this would go a long way in our collective effort in fighting COVID-19”

Dr. Jamoh also disclosed that along with the items the Agency is also assisting the Lagos state Government with a sum of 20 million naira, adding that the donations from the Agency are not limited to Lagos alone as all geopolitical zones would benefit from the Agency’s humanitarian gesture.

“Our donations are not limited to Lagos alone, this is just the flag-off, we will also make donations to other states affected and as well ensure that all geopolitical zones of the country benefit; this we will continue to do as we fight against this deadly scourge”, he said.

Commenting on the vessels that were made available to the state, the NIMASA DG stated that it would assist Lagos in responding to incidents in the coastal states for anchorage evacuation if need be, and that the crew on board are volunteer staff from the Agency who have been trained on manning the Fast Intervention Vessels.

Dr. Jamoh also appreciated the Federal Government for its timely response to the pandemic stating that the Government has created roles for the necessary agencies to fight the scourge. He particularly commended the efforts of the National Centre for Disease Control (NCDC) in responding to infected persons as he also appealed to the media to play their roles in sensitizing the public stressing that everyone has a role to play in the fight against the pandemic.

Receiving the items on behalf of Lagos State, the Commissioner for Finance, Mr. Rabiu Olowo said the State government was overwhelmed by the goodwill and support from NIMASA. 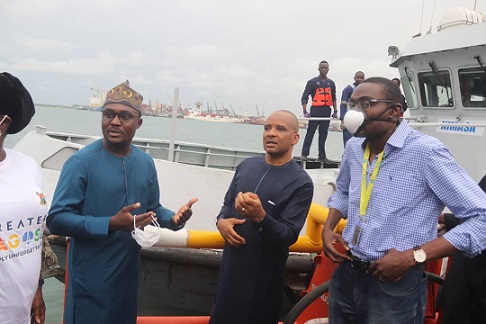 R-L: Commissioner of Transportation, Lagos State Mr Frederic Oladeinde, Director General of the Nigerian Maritime Administration and Safety Agency (NIMASA), Dr. Bashir Jamoh and Commissioner for Finance, Lagos State, Mr. Rabiu Olowo during the presentation of vessels in addition to some medical equipment and items to support the fight against COVID 19.

“This is most welcomed and on behalf of the governor and the good people of Lagos State, I say thank you. As you are all aware Lagos State is the epic center of this pandemic in Nigeria. Everyone is fighting this pandemic across the globe.”

“We have seen the response of the State to this and the true leadership of Mr. Governor to fighting this. This donation will go a long way in supporting and complementing the state effort towards fighting this Pandemic,” he said.

NIMASA also pledged that there were handy volunteers from the Agency and experts ready to work with the government in the use of fire engines for fumigation purposes.