Twenty-eight years after, memories of his life and times have faded out. Not even members of his primary constituency remembered to commemorate his skilful style last Saturday. But Cowbell Milk, the flagship brand of Promasidor Nigeria Limited, made the difference. 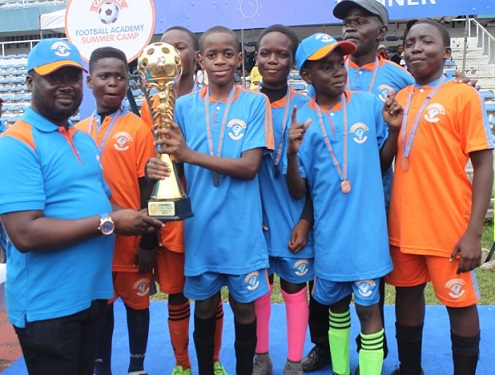 At that same main bowl of the National Stadium, Lagos, where late Samuel Okwaraji slumped and died while in the colours of the Super Eagles of Nigeria, Cowbell Football Academy (CFA) remembered the national hero exactly 28 years after. And for kids and parents that participated at the final ceremony of the Cowbell Summer Camp, a programme organised by the CFA to groom young talents, it was a date with the history with the late midfielder looming large.

Among those who played at the final ceremony was Toyeeb Gidado Olakunle, who captained the Under-15 Team Nigeria at the Youth Olympics held in Botswana in 2014. Many people have nicknamed Toyeeb Nigeria’s rising Wonder Boy, a name once associated with Okwaraji.

The master of ceremonies reminded the crowd that it was in that main bowl of the National Stadium, Lagos that Okwaraji had a tragic end during Super Eagles’ encounter with Angola in a FIFA World Cup qualifier game.

Speaking at the event, ex-Super Eagles defender and Barcelona player, Gbenga Okunowo said the event was a positive memorial for Okwaraji. He said the young talents that participated in the event would, some day, replace Nigeria’s past heroes, if the national team managers paid attention to them.

“Many people do not remember Okwaraji anymore. So, this event is a good reminder. We cannot replace the late midfielder but the young talents I have seen could one day take his place in the national team,” he said. 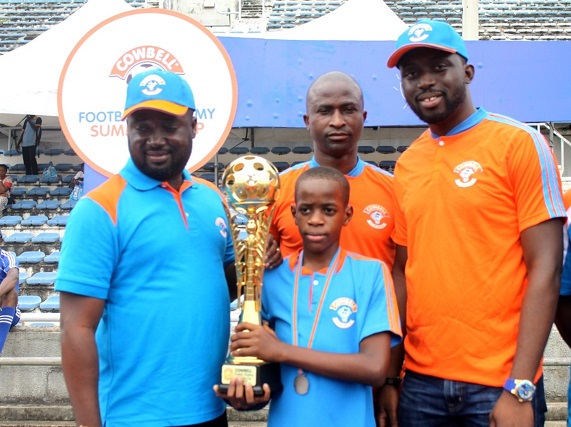 “If you watch very well, you would notice that this was how Nigerians gathered to watch the last game Okwaraji played. But it is a good reminder because many of the youths that are being trained by CFA can replace Okwaraji and other stars whose deaths or retirements have left a vacuum in the national team,” Howard said.

Marketing Manager, Promasidor Nigeria Limited, Abiodun Ayodeji said the sponsorship was aimed at building responsible citizens. He added that the initiative was part of Promasidor’s support for the socio-economic development of the country.

CFA Rector, Godwin Dudu-Orumen said the academy had achieved outstanding records, which he attributed to Cowbell’s motivation and support.

Dudu-Orumen disclosed: “Two products of the academy have played for Under-15 national team. One of them, Toyeeb Gidado Olakunle, captained the Under-15 Team Nigeria at the Youth Olympics held in Botswana in 2014.

“Another CFA product, who was given a scholarship, has graduated from an American university, while the Lagos State Polytechnic is currently counting on seven other trainees, who were recently admitted into the school, to help develop its football team. These lofty achievements could not have been actualised without the support of Cowbell.”

Ten awards were given to outstanding individuals and teams for their impressive performance during training. Among the honours were the Cowbell Overall Wining Team Prize, Stephen Keshi’s Prize for Outstanding Leadership, Muda Lawal’s Prize for Most Hardworking participant and Rasheed Yekini’s Prize for Most Improved Player.