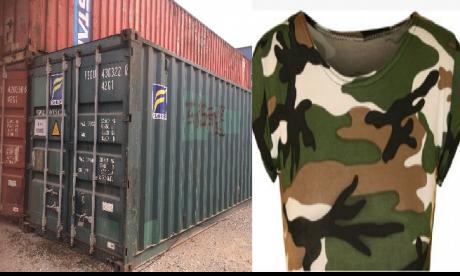 As part of efforts to ensure smuggled prohibited items do not find their way into the country, the Kirikiri Lighter Terminal (KLT) command of the Nigeria Customs Service had intercepted a 40-foot container laden with military fatigues in Port Express Bonded terminal, Kirikiri Lagos

At a brief ceremony held at the terminal, the Area Controller, Compt Lami Wushishi, stated that the items contained in a 40-foot container with number ECMU 9239436 originated from China.

She said the military wares were falsely declared to contain 200 packages of thread and 150 packages of polyester material on the shipping manifest, but upon physical examination, it was found to contain military camouflage.

She said the items were discovered during routine physical examination, adding that two suspects, the agent and the representative of the importer arrested in connection with the seizures would also be handed over to the DSS for further investigation.

Worried at the negative effect such products would have if they find their way into the country, Wushishi urged importers and stakeholders operating at the port to ensure they comply with all extant laws and also make genuine declaration in order to enjoy seamless clearance of their consignments.

“Due to the security situation in the country, such consignment should not come in. Moreover, army uniforms are exempted from payment of duty under schedule two of items exempted from duty payment. So it beats our imagination why would they conceal army uniform in this container if they don’t have an ulterior motive to it.

“The items are regulated and you need a permit to bring in either military or para military uniforms. So due to our collaboration, we are handing over the military uniforms and two suspects to the DSS for further investigation,” she said.

Director in charge of Intelligence unit, DSS, James Iliya received the container on behalf of the agency.

Elumelu in Jaji, Urges officers to stands as leaders worth emulate by future generation

Emefiele explains how economy was saved from collapse