Dangote Oil Refining Company Limited’s installation of equipment for the crude oil refinery being built in Lagos will begin this month. 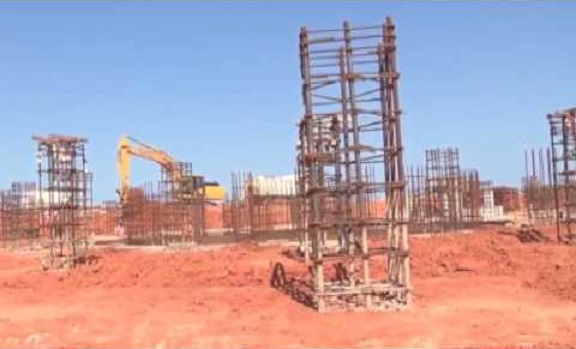 The Head, Quality Assurance/Quality Compliance and Construction, DORC, Mr. Rama Putta, told our correspondent, who visited the site of the plant, that the 650,000-barrels-per-day refinery would come on stream by September 2019.

He said the sand filling of the site was completed six months ago, adding that 60 per cent of the land was swampy.

“We dredged sand from the Atlantic Ocean, about 60 million cubic metres. The world’s biggest dredgers dredged the sand for about 18 months. It’s a big job and is completed successfully. Now, what is left is to erect the equipment.”

Our correspondent was taken round the site to see some of the materials, including steel, plates and cranes, which were brought in for the construction of the refinery.

Putta stated, “We need a lot of big cranes. All the equipment are going to come horizontally; they are to be put vertically. That is why to lift them, we need cranes. We need 300 cranes; 250 cranes are already here. The remaining cranes are coming from China.

“We will start erecting the refinery equipment in a week or 10 days’ time, and it will take about 15 to 20 months.”

According to him, about 3,000 pieces of equipment are required for the refinery.

He noted, “Out of that, more than 200 have already come in. They come in semi-finished shape and we will finish them off. The remaining are being manufactured in various countries, including China, India, America, South Korea, Singapore and Malaysia.

“The challenge is bringing heavy equipment. There are 300 very heavy equipment and we have given contracts to the biggest shippers in the world to bring them from different countries.”