The management of the trading floor of The Nigerian Stock Exchange (NSE) during the week released the traded data shown the Dangote Cement Plc, Access Bank Plc and Zenith International Bank Plc shares, the toped other equities which accounted for 833.966 million shares worth N95.969 billion in 3,203 deals by volume, contributing 33.12% and 84.10% to the total equity turnover volume and value respectively.

According to the report, the financial services industry led the activity chart with 1.507 billion shares valued at N16.354 billion traded in 12,511 deals by volume; thus contributing 59.85% and 14.33% to the total equity turnover volume and value for the week respectively. 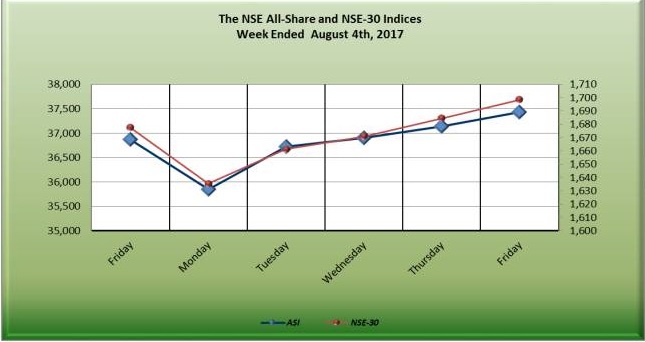 “The NSE All-Share Index and Market Capitalization appreciated by 1.52% and 1.53% to close the week at 37,425.15 and N12.899 trillion respectively. Similarly, all other Indices finished higher during the week with the exception of the NSE Banking and the NSE Oil/Gas Index that depreciated by 1.64% and 3.05% respectively while the NSE ASeM Index closed flat.

Celestine Unkpong, a retail and astute investor has said, though the market over the week showed appreciate able in some indices but analysing further disclosed that the market is better be describe as growth in decline trading.

Unkpong pointed out that looking at overall active equities traded in price movement both gainers and losers accounted for 66 equities to 105 equities that unchanged in price represents 62.86percent. Putting everything in percentage showed that the market overall did not grow as per said rather depreciated or worthless in economic value.