The management of BrandEscort has nominated Dangote Cement Plc as its #9jaSuperbrandOfTheMonth for July. 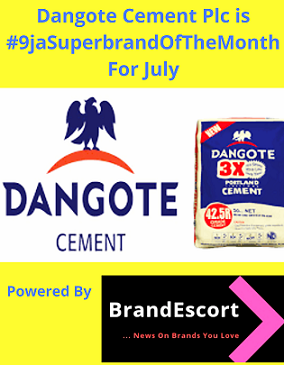 Dangote Cement was nominated  for launching a campaign that promised to make 1,000 Nigerians millionaires, not minding the challenges faced by businesses globally, as a result of COVID-19 pandemic.

At the unveiling of the promo in Lagos, the company’s Group Managing Director,
Mr Michel Puchercos, said the promo was instituted to reward its loyal customers.
Puchercos gave the assurance that the company, through the promo, would change the standard of living of its consumers and end users during the COVID-19 pandemic.

He said that 1,000 lucky Nigerians would win a star prize of one million naira each, over a period of 16 weeks of the promo.

Puchercos, who observed that many families lost their sources of livelihood as a result of the pandemic, said that the company launched the promo to alleviate the pains.

He said that the company opted for cash prize to enable the beneficiaries to set up small businesses in the face of COVID-19.

Puchercos said that the Season 2 Promo, launched following a huge success recorded in the 2019 promotion, would run from July 15 to Nov. 15.

He said that the company was determined to reward the consumers and add value to their economic well being, with the promo.

According to him, other prizes to be won apart from one million naira cash, include tricycles, refrigerators, television sets, generators, goodies packs, smaller monetary prizes and airtime.

Other brands such as MTN Nigeria, First Bank, Amber Energy Drink Ltd etc. also made significant impact in the lives of the consumers in July.

For instance, MTN Nigeria on July 15 became the first telecommunications company to launch eSim technology for mobile phone users in the country.

FirstBank in July activated Free Fuel Promo in collaboration with Verve International and Oando Plc to reward its customers.

Access Bank Plc in July gave out N87.74 million to over 1,000 customers who emerged winners at the second quarterly draw of  its DiamondXtra Season 12 reward scheme.

#9jaSuperbrandOfTheMonth is monthly awards initiated by BrandEscort, aimed at inspiring innovation and creativity in brands to enhance the lives of the consumers.

Managing Director/CEO, BrandEscort, Mr. Bamidele Adeleye says the company is looking out for innovative brands that are determined to impact the lives of the Nigerian consumers.