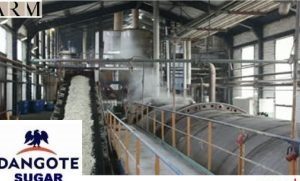 Dangote made this known yesterday in government house Lafia  when he visited the state governor Umaru Tanko Al-Makura to intimate  him on the commencement of the project, explaining that the setting up  of the sugar factory in the state will provide direct employment to  30,000 persons.

He said while over 100,000 persons who are skilled and unskilled will eventually get indirect employment, the company would also engage over  10,000 out growers who would be provided with all the necessary inputs  and ready markets for their produce.

The Chairman said the refinery which will be located in Tunga, Awe local  government area of the state is capable of producing 480 tons of sugar  and generate 96 megawatts of electricity for the state which will attract other investors to the state.  “The production capacity of the sugar factory in Nasarawa will be  the  largest in West Africa, no sugar factory produces more than 250 tones,  so we are doing double in the state, we need about 600 trucks to  distribute the sugar across the country, “ Dangote said.

He further explained that the project will transform the lives of Nasarawa people as most of them will take the advantage of the  electricity to set up small scale business.
The Africa’s richest man promised to build new schools and renovate existing ones within the host communities and take over the payment of  teachers and employ more in addition to providing pipe born water for  the development of the area.
Also speaking, the Group Managing Director of Dangote Sugar Refineries, Abdullahi Sule said the project will require about 60,000 hectares of land, adding that the 40,000 hectares of land provided by the Nasarawa  state government presently will not be enough.
Responding, the state governor Umaru Tanko Al-Makura who expressessatisfaction with the decision by Dangote Group to invest in the state, promised to provide the enabling environment for smooth operation including security.
He said the state government has since ensured that access road to the area was constructed,