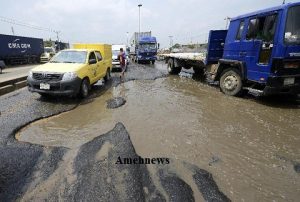 Abdullahi disclosed this in news men on Saturday in Lagos.

He said as a major player in the maritime sector, the company had so far spent N1 billion to make the road accessible to the port.

While appealing to the Federal Government to fix all the roads that lead to the port,  that the organisation made the gesture as part of its social responsibility.

“The distance from the port gate to the Airway Bus stop caused the organisation that much.

“We would have done more if not for Lagos State government’s restrictions; even the Nigerian Ports Authority (NPA) made an attempt to fix the roads but stopped.

“It is not within the purview of NPA to repair roads, so they stopped the idea and the roads have remained bad since then.’’

The presindent of Senior Staff Union of Nigeria Ports Authority (NPA) had also called on the Federal Government to fix the roads leading to both the Tin-Can Islnd and Apapa Ports.

The Union President, Benson Adegbeyemi, had decried the poor state of the access roads in Apapa, saying that it had greatly impeded movement of economic activities at the ports.

He noted that the recent rehabilitation work done on some access roads by some private operators had not produced the desired result and called on Federal Government to take over the projects.