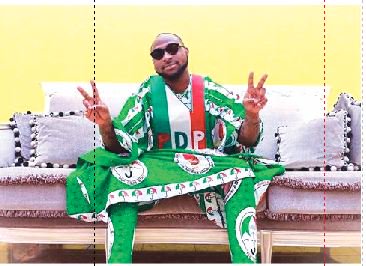 IN an effort to ensure success for his uncle, Senator Ademola Adeleke, at the Osun State gubernatorial election which holds today, hip hop mega star, Davido, on Thursday stormed Osogbo, the state capital.

Davido had registered National Youth Service Corps in Lagos recently but never particpated in camp activities as he jetted out for a US tour which was cancelled because of Hurricane Florence.

Since the aborted tour, Davido has gone to Osun to campaign for his uncle who has been described as the ‘dancing senator’ because of his love for dancing.

On Thursday, he posted a picture where he is wearing an Agbada in the Peoples Democratic Party (PDP) colours of green, red and white and with the letters, PDP, embroidered on it, on Instagram.

“@ademolaadeleke_01 victory awaits You and the Beautiful People of the state of Osun.”

While many fans have hailed the star for campainging for his uncle, others have lamblasted him.

A commenter, juliusibe32, wrote, “OBO victory is ours… hope say you go remember me for paradise,” while another commenter, ndidinwachukwu1989, wrote, “Ur so called uncle wanna be a Governor….. What has he done for his pple! Governor my ass.”

I Go Dye and I are still friends –Bovi