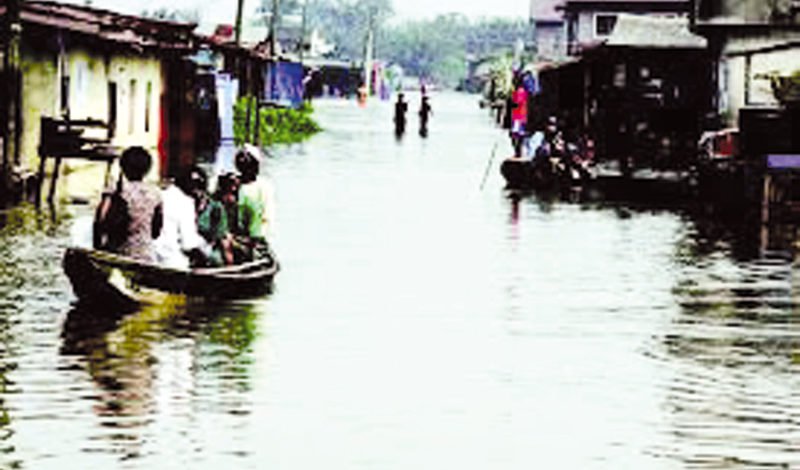 hammed Suleiman, the Executive Secretary of the agency, made the disclosure in an interview with News Agency of Nigeria (NAN) on Thursday in Yola.

Suleiman said hundreds of domestic animals, including cattle, were also lost to the flood.

He said the deaths recorded were particularly from Yola South, Guyuk,  Lamurde and  Song  Local Government Areas of the state.

“Flooding is becoming a serious challenge for us in Adamawa and the situation is indeed alarming.

“We lost 10 people and hundreds of people have been displaced. Domestic animals in large numbers were equally lost to the deadly flood. Also, hectares of farmlands especially in nine local government areas located at the bank of River Benue have been completely submerged,” Suleiman said.

He said the flood was also posing serious challenge to farming activities in the state, adding that it could be a threat to food security in the state.

Suleiman said that more than half of the state population was currently under threat of impending flood and urged residents to be on the alert.

Nine people lost their lives while over 200 houses were destroyed and numerous farm lands washed out by flood in Gombe between May and August, an official has said.

Benjamin said four out of the nine deaths were recorded in May following a downpour in Gombe town.

She said the remaining five deaths were recorded in Cham community of Balanga Local Government Area of the state in August also after a downpour.

The deputy director also said over 200 houses and numerous farm lands were washed away in Nyuwar, Jesu Cham in Balanga and Komta Ayaba in Biliri Local Government Areas.

According to her, the state government through SEMA acted promptly by providing 1,200 bags of maize as relief material to victims in the two councils.

“For now, 1,200 bags of 100kg of maize were distributed as relief material to the affected persons. We are now waiting for the National Emergency Management Agency to come with their relief materials,” she said.

She appealed to wealthy individuals and corporate bodies in the state to assist the needy to ameliorate the plight of the victims.

Inaku gave the update on flood situation in the state yesterday in an interview with the News Agency of Nigeria (NAN) in Calabar.

Inaku, who said that the flood had seriously affected the victims, also told NAN that most of them had since relocated to upper lands for safety.

He, however, said that no life had been lost in the menace,but disclosed that the flood started in the state in July.

According to him, most of the victims are living along the water channels while others in swampy areas.

He said that the agency had embarked on aggressive campaign, to sensitise residents in the state on the need to stop dumping refuse on drainage and building along water channels.

He explained that the flood had affected residents in Boki, Ogoja, Yala, Calabar Municipality, Calabar South and other local government areas in the state.

“Cross River has always been affected by flood during the raining season. Currently, we have over 175 houses destroyed and as a result, over 3,000 persons have been displaced.

“This menace has greatly affected farming activities, especially in Boki, Yala and a few others areas.

“We are looking at NEMA and other corporate organisations to come in and assist the victims,’’ he said.

He appealed to the National Emergency Management Agency (NEMA) to assist the state with relief materials for the victims.

The Director of Legal Services, NEMA, Mr. Umar Mohammed, confirmed the development when he led a five-man delegation to Yenagoa, Bayelsa State, capital.

Speaking in a courtesy visit to the state’s Deputy Governor, Rear Admiral John Jonah (retd), Mohammed said they were in the state to interface with relevant stakeholders concerning the impending flood,.

“NEMA as the coordinating agency on disasters has constituted five teams to visit States that are likely to be affected by flood this year, with a view to assessing their level of preparedness in the event of flood as predicted by NIMET.

“The essence is to articulate some proactive measures , identify flash-points as well as inspect equipment that could be deployed to tackle flood within the shortest possible time”, Mohammed said.

Jonah reiterated the need to build flood shelter stations in all the local government areas of the state to accommodate displaced persons.

He recalled that in 2012, the state government recommended the building of such stations to the Federal Government,  but said no concrete steps had been taken, except the designing of engineering drawings for the project .

“Every flood-prone area should have a high ground identified and a big hall built to accommodate displaced persons whenever there is flood”, he said.

The deputy governor also decried the “situation whereby relevant agencies of government do not do anything concrete concerning flood matters until the next flood season”.

He said instead of the usual fire-brigade approach, proactive measures and early preparations should be made to deal with the perennial issues of flood.

He said the state government appointed Incident officers  for all the local governments in the state with a responsibility to coordinate flood-related activities in their respective councils.

The Rice Famers Association of Nigeria (RIFAN) in Kano state says the recent flood has destroyed over 5,000 hectares of rice farm in some local government areas of the state.

The RIFAN state chairman, Alhaji Abubakar Aliyu, told the News Agency of Nigeria (NAN) in Kano on Thursday that the rice farms were affected in 10 local government areas of the state.

He said the disaster, which occurred in August affected most of the rice farms situated in Fadama areas, pointing out that only farms located upland were not hit by the disaster.

“Each hectare of farm was expected to produce between six and seven tonnes of the commodity but with this disaster, the production will be seriously affected.

“You know most of the rice farms are situated at Fadama areas which are water settlements. So when the incident happened many farms were submerged by water,” he said.

Aliyu said the farmers, who collected loan facility under the Central Bank of Nigeria (CBN) Anchor Borrower Programme, had lost over N5 billion as a result of the flood.

“The association has already reported the incident to the Nigerian Agricultural Insurance Scheme (NAISL) since the farmers are covered by the insurance company,” he said.

He noted that the collapse of an earth dam in Bunkure local government area aggravated the situation.

The chairman, however, called on the Federal and state governments to come to the aid of the affected farmers in view of the huge loss they incurred.

He disclosed that no fewer than 44,800 rice farmers benefited from the Federal Government’s agricultural loan under the Anchor Borrower Programme this wet season.

Mr Vincent Owen, Director of Planning, Research and Forecasting of NEMA, Abuja, made the urgent call when he visited a flood prone area in Enugwu-Otu in Anambra East Local Government Area (LGA) on Thursday.

“There is nothing to wait for in evacuation of the people living in the flood prone areas in Anambra, the indices seen in 2012 flood has manifested in all the areas NEMA visited.

“In Ogbaru LGA, all the towns have been washed with flood, in Enugwu-Otu and Nkpundo Otu, the story is not different,” he said.

The director warned that the forecast of the Nigeria Hydrological Services Agency (NIHSA) that 2018 flood might come in same magnitude of 2012 should not be treated with kid’s glove.

According to him, the update regarding the flood is so alarming and should not be treated lightly as  all the indices  during the 2012 flood has been seen and the speed at which the river is rising needs proactive actions.

“The Anambra government should as a matter of urgency begin immediate evacuation of people living in the flood prone areas to the emergency shelter centres in the state,” he said.

Owen said NEMA under Mr Mustapha Maihaja, the Director-General of NEMA was committed in providing relief materials to all states either in flood or other emergency issues in the country.

He urged all the 12 states that were in flood prone areas not to play with the forecast and assured them of the agency’s speedy assistance whenever the need arose.

Owen said the Federal Government had received a message from the Cameroon Government of its intentions to open its dams and asked for proactive measures by the affected states.

He said if the forecast was not timely adhered to by the 12 states, it would be worse than 2012 flood experience and “NEMA do not pray for it”.

Owen said NEMA was visiting the states that were flood prone to have a firsthand information on the preparedness of the states in moving the victims to higher grounds and providing decent camps for the affected communities.

Owen said the volume of water noticed in Ogbaru and Enuwgu Otu was alarming and portended disaster if not proactively managed.

He said NEMA was in the state to ascertain the level of preparedness of the government in response to the flood warning signals as issued by NIHSA and urged the government not to delay action .

Mr Cprian Agupugo, Anambra Executive Director of SEMA, said the state government had since embarked on sensitization and enlightenment campaigns on needful actions to be taken by the people.

Agupugo said the state had made ready 28 emergency shelter centres in the flood prone areas of the state and assured the agency that other necessary materials would be provided.

“Now that it is evident that the flood is rising, the displaced persons will be evacuated and taken to centers closest to them in no distant time,” he said.

He said that state government was committed towards safeguarding the lives of its citizens and would run to the NEMA before they exhaust the relief materials in their storage.

Agupugo commended NEMA for reiterating the warning and reassuring SEMA on its willingness to play its part to ensure that nothing hinders the success of evacuation and safe keeping of the people living in the flood prone areas.

Mr Sunday Ochie, a native of Enuguw- Out, said that the flood which started around July had increased beyond their expectation this September and had destroyed their farmland.

Ochie said they were monitoring the rise and was still farming trusting that it was not going to be heavy but it had played out negatively and urged state government to give quick assistance.

Mrs Grace Oneh, a health worker at the Christ the King Maternity in the community, said that the flood had covered the homes of many people adding that most of the victims had gone upland to stay with their relatives.

Oneh said she was watching to see if the flood would recede if not, she would leave to upland where centers had been provided by the state government.

She said that relief material should be distributed on time before it got too rowdy and the distribution should be monitored.