In a renewed strategy to recover the whopping total debt obligation of over N4.6 trillion owed Asset Management Corporation of Nigeria (AMCON) by recalcitrant debtors across the country, AMCON on Thursday met with the Economic and Financial Crimes Commission (EFCC). The meeting was for both agencies to consolidate on the gains of their relationship especially in the areas of investigating, prosecuting and compelling all obligors of AMCON in accordance with the relevant statutes. 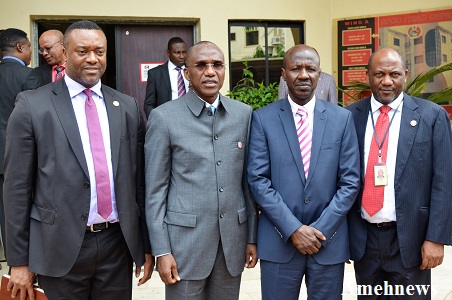 The high-level meeting of the two government agencies led by AMCON Managing Director/Chief Executive Officer, Mr. Ahmed Kuru, and EFCC’s Acting Chairman, Mr. Ibrahim Mustafa Magu is working on taking another look at some banks and their officials that were instrumental to the abuse and violation of internal processes that led to the huge non-performing loans in AMCON’s portfolio. The agencies are planning to revisit, reinvestigate and duly prosecute such banks and the responsible officials.

The EFCC Acting Chairman, who welcomed the AMCON boss and his team described the assignments of both agencies of government as “very tough, overwhelming and challenging.” He however added that he was happy that AMCON under Kuru is doing everything within its mandate to confront the obligors with all the risks involved in the process of doing so.

He said it was for that reason that EFCC established AMCON Desk with dedicated EFCC officials that ensures that all AMCON related cases in EFCC received speedy attention. Magu assured Kuru that the AMCON Desk at EFCC will continue to be functional adding that the EFCC is willing to increase the number of personnel on the Desk if so required and would be willing to establish a Lagos branch if necessary to make sure these huge loans are recovered in the interest of the Nigerian economy.

Condemning the impunity with which those transactions were done, the EFCC boss affirmed that some of these obligors “who took loans without the intention of paying back” did not envisage that someday an agency like AMCON will come knocking on their doors seeking to recover the loans. According to him, giving the similarity in the objectives of both agencies, the acting EFCC Chairman said there is need for joint trainings towards fostering better understanding between AMCON and the EFCC.

While reaffirming the commitment of the EFCC to cooperate and provide the much needed support to AMCON, Magu urged AMCON to ensure justice is done in all cases because most of the obligors may not have acted alone in their unwillingness to repay, but may involve the connivance of some of the bank officials whose motive was to cheat the banks ab-initio. He however disclosed that “in appropriate circumstances, these bankers would also be called upon to account for their roles in granting these questionable facilities.” 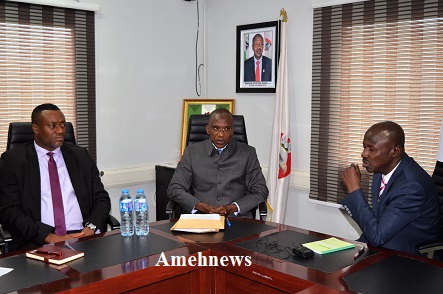 On his own part, Kuru who thanked the Acting Chairman of EFCC for graciously receiving the AMCON delegation however expressed appreciation for his passion and cooperation in the collaboration with AMCON toward recovering the enormous bad debts from recalcitrant obligors of AMCON.

While appreciating the immense contribution of the AMCON Desk at EFCC, Kuru who thanked the Acting Chairman for creating that unit that has led to several recoveries, added that AMCON is willing to provide the required support to the AMCON Desk at EFCC by providing information, logistics and training to the team to enable them carry out their assignment without hitches. He also thanked all EFCC staff that are currently on the AMCON Desk for a job well-done since it was established.

Recounting AMCON’s role in the economy especially in the banking sector also stated that since its establishment, AMCON acquired debts from 22 banks worth N3.7 trillion and provided financial accommodation to 10 banks of about N2.2 trillion. He observed that despite AMCON’s recovery efforts, the Corporation still holds unresolved loans in excess of N4.6trillion which represents about 75% of total national budget. The MD expressed concern that failure on the part of AMCON to resolve the debts will have far reaching implication for the nation at large.

The AMCON boss who stated that the EFCC and AMCON have similar mandates of ensuring economic stability, which provides another reason for AMCON to collaborate with EFCC and take advantage of the enormous powers of the EFCC also highlighted some of the challenges militating against AMCON recovery efforts including the slow judicial process, concealment of assets by the obligors, forged documents, and in some instances, collusion between the bankers and the obligors among others.