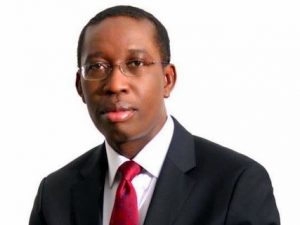 Delta state government is targeting N70.1 billion in 2017 fiscal year as its internally generated revenue (IGR) representing 26.90% of the total projected revenue by the state.
Governor Ifeanyi Okowa stated this while presenting a budget proposal estimate of N270.1 billion for 2017 fiscal year to the state House of Assembly for consideration.
Governor Okowa maintained that the 2017 IGR estimate is far lower to that of 2016 approved estimate by N 5.23 billion or 6.94%.
Governor stated that the sum of N148.9 billion is expected forum statutory Allocation in the 2017 fiscal year. The optimism for 2017 budget is based on expected improvement in the fiscal and financial discipline of the Federal Government, he added.

Governor Okowa disclosed that the budget christened “Budget of Fiscal Consolidation and Steady Progress” will touch all sectors of the state.

The governor stated that the proposed recurrent expenditure is N151.90 billion while proposed capital expenditure stands at N119.001 billion and called for financial prudence.
He promised that the state will strive to pay workers salary as at when due to enhance their welfare.