The management of the Nigerian Stock Exchange (NSE) in a four-day trading of the week due to the Federal Government of Nigeria declared Monday 29th May, 2017 as Public Holiday to mark the 2017 Democracy Day shown trading in the top three equities – Diamond Bank Plc top the chart follows shortly by FBN Holding Plc and United Bank for Africa Plc (measured by volume) accounted for 978.710 million shares worth N4.137 billion in 5,028 deals, contributing 42.21% and 17.37% to the total equity turnover volume and value respectively.

According to the traded data released over the weekend, the Financial Services Industry (measured by volume) led the activity chart with 1.950 billion shares valued at N15.479 billion traded in 14,381 deals; thus contributing 84.12% and 65.00% to the total equity turnover volume and value respectively. While the Consumer Goods Industry followed with 156.358 million shares worth N2.875 billion in 2,804 deals. The Conglomerates Industry occupied the third place with a turnover of 70.452 million shares worth N168.377 million in 739 deals.

The market recorded a total turnover of 2.319 billion shares worth N23.813 billion in 22,310 deals were traded this week by investors on the floor of the NSE in contrast to a total of 1.877 billion shares valued at N20.055 billion that exchanged hands last week in 19,979 deals.

Also traded during the week were a total of 52 units of Exchange Traded Products (ETPs) valued at N13,802.70 executed in 6 deals compared with a total of 65 units valued at N1,967.85 transacted last week in 7 deals 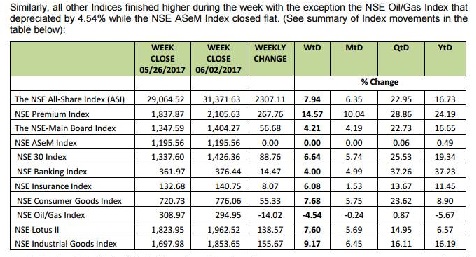 “The NSE All-Share Index and Market Capitalization appreciated by 7.94% to close the week at 31,371.63 and N10.845 trillion respectively. Similarly, all other Indices agreed with blue print of the federal government economy policy by finished higher during the week with the exception the NSE Oil/Gas Index that disagreed with others by depreciated by 4.54% while the NSE ASeM Index closed flat. Analysts are of the opinions that oil and gas in disagreed due to strategy movement by Saudi government to outsmart other oil producing exporting countries which is cussing some level of suspicious with the OPEC