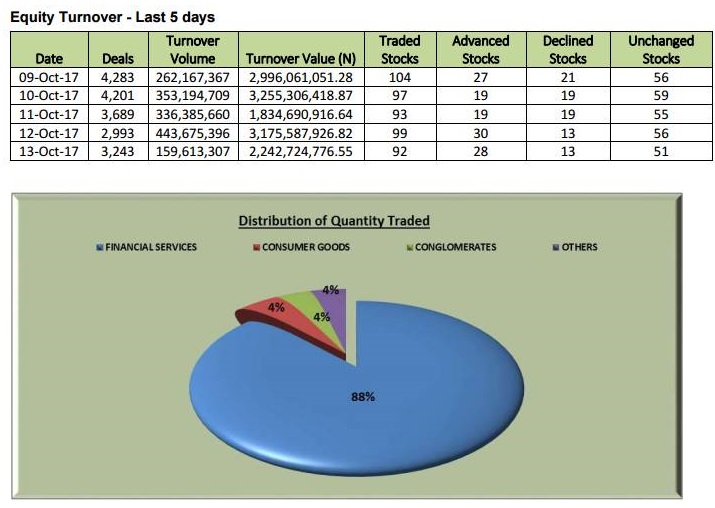 Management of the floor of the Nigerian Stock Exchanges (The NSE) at the weekend published traded data of the equities. The figures shown that three equities led by Diamond Bank Plc, Zenith International Bank Plc and Transnational Corporation of Nigeria Plc by volume, accounted for 985.762 million shares worth N2.841 billion in 3,401 deals, contributing 63.39% and 21.04% to the total equity turnover volume and value respectively.

According to the report a total turnover of 1.555 billion shares worth N13.504 billion in 18,409 deals were traded this week by investors on the floor of the Exchange in contrast to a total of 1.493 billion shares valued at N15.107 billion that exchanged hands last week in 14,549 deals.

“The NSE All-Share Index appreciated by 1.45% to close the week at 36,848.17 while Market Capitalization recorded N12.684 trillion respectively. Similarly, all other Indices finished higher during the week with the exception of the NSE ASeM Index which closed flat

Alleged a new charge in maritime operations through the back door Agents Kick against, say Shippers’ Council Incompetent