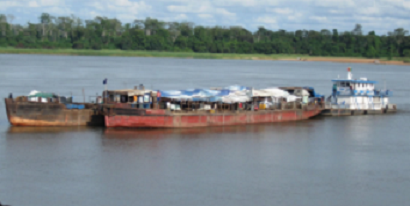 Winding through the creeks of Nigeria’s oil-producing Western Delta, between wellheads and canoes, are barges and smaller vessels used to transport crude. They are set to become a more familiar sight.
Cash-strapped domestic oil companies in Africa’s largest producer are seeking new — and riskier — ways to move the crude extracted from their onshore fields, after militant attacks over the past year rendered the crucial Forcados pipeline and export terminal unusable.
Brent crude’s almost five-month stretch above $50 a barrel is prompting the country’s domestic producers to turn to barges to take tens of thousands of barrels at a time directly from wellheads to alternative terminals such as Chevron-owned Escravos, according to interviews with executives and industry participants.
Companies are also using existing pipeline infrastructure to move crude to storage tanks in Warri, a major city in the Delta region. From there small vessels that can carry around 100,000 barrels transfer crude to larger tankers offshore ready for export.
“Forcados has been down for too long,” said Dolapo Oni, head of energy research at Nigeria’s Ecobank Group. “Companies started making alternative arrangements last year but of late there are lots of new ones.”
Indigenous producers that control the majority of onshore output — a third of Nigeria’s total — from Seplat and Shoreline Energy to Neste Oil and Niger Delta Petroleum, as well as the state-owned Nigerian National Petroleum Company, are among those seeking new routes to get oil ready for export.
Their willingness to do so underlines both how OPEC’s supply cuts, which are central to keeping the oil price buoyant, is reverberating globally, as well as concern that flows through Forcados are likely to remain disrupted.
Although there have not been any further hits since early January, the 300,000 barrel a day Forcados, majority owned by Royal Dutch Shell, remains offline. This partly explains why Nigeria’s production, of which more than 85 per cent is exported, has not fully recovered.
The government’s new strategy for dealing with the militancy has calmed the restive region, but output is still hovering close to a 30-year low, at nearly 1.6m b/d, according to OPEC.
London-listed Seplat has had a deal with international oil trader Mercuria Group to transport oil by water over the past year. But other companies such as Eland Oil & Gas have sought similar deals in recent weeks, while Shoreline Energy has trialled the new export routes, three people said.
Producers already bypassing Forcados, such as Lekoil, have also started barging crude to makeshift export facilities along the coast, another person said.
“We’ve all been trying to keep this under wraps. All producers that operate on the Delta are trying to set up arrangements,” said one local producer.
Compared with using a pipeline, volumes are smaller and the rate of loading is twice as long. Barging is four times more costly, bears more environmental risks and transporting more crude by vessels might make them prone to militant targets, analysts say.
“It’s a messy, expensive operation . . . it is constrained by the size of jetties and navigation [along the creeks],” said an executive whose operations are affected by the Forcados disruption. He said the volumes being exported were “very small” at around 500,000 barrels a month, 15 times less than when Forcados was operational.”
The strategy, being encouraged by local middlemen, signals the local industry’s desperate need to restart lucrative exports and cash flows.
After repairing the Forcados system following a militant attack last year, only to see it sabotaged again, Shell has not completed repairs.
For local producers this has meant production has been shut-in, worsening financial troubles.
The militancy combined with the downturn in crude prices had already created a cash crunch for these debt-laden companies, who acquired their blocks when oil prices were double current levels.
“If they did not barge they would not be able to evacuate any of their production,” said a former executive at an international oil company with operations in the country.Even the limited volumes they are now barging are better than nothing.”
“By not moving oil via pipeline it is more difficult to track the origin of this crude, making it more susceptible to corruption.
Oil transported by ship inside Nigeria is sometimes commingled from different sources in ways that are tough to monitor,” said Aaron Sayne at the Natural Resource Governance Institute.
“Criminal networks also use ships to move stolen oil through the same creeks and rivers as legal parcels. The resulting complexity can make it hard to know who owns a given parcel, or where it came from.”
Relations between the Delta and the federal government have improved, but analysts say sabotage and theft remain an issue. The instability means producers will prioritise finding alternatives to pipelines, said Gail Anderson, Nigeria analyst at consultancy Wood Mackenzie.
“Barging is not great from a volume perspective, but you could get more jetties, facilities, and I daresay we’ll see more and more of that.
“Producers can’t just rely on pipelines. They need options.”