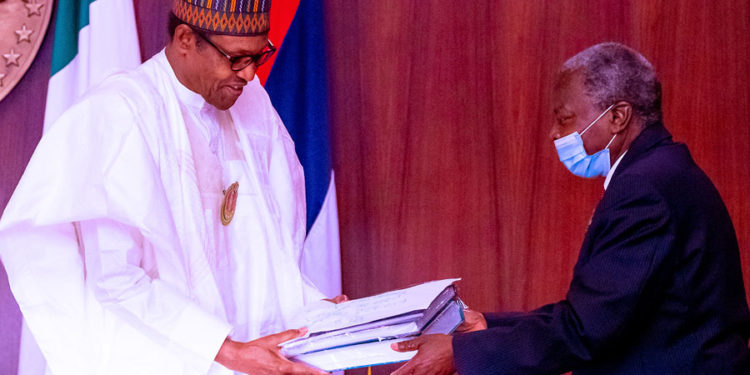 THE suspended acting chairman of the Economic and Finance Crimes Commission (EFCC), Ibrahim Magu, is unlikely to return to the post, following a recommendation by the Judicial Commission of Inquiry into the activities of the commission.

The panel has told government to appoint a transitional chairman for the agency for two years.

The commission, headed by a former President of the Court of Appeal, Justice Isa Ayo Salami, also wants the next EFCC chairman to be appointed from other law enforcement agencies outside the Nigeria Police Force.

Besides, it is of the view that the Federal Government should disengage all the 970 policemen from the EFCC within two years.

The recommendations are some of the highlights of the panel’s report which was submitted to President Muhammadu Buhari at the Presidential Villa in Abuja yesterday.

Justice Salami said during the submission of the report that four consecutive chairmen of the EFCC from inception have been drawn from the police.

“Therefore in appointing a new chairman of EFCC, consideration should be given to candidates from other law enforcement or security agencies and qualified core staff of the EFCC as provided in the Economic and Financial Crimes Commission (Establishment) Act 2004,” he said.

Continuing, he said: “It is also important to point out that at the moment, 970 policemen (114 drivers, 641 Mobile Policemen and 215 operations) are on secondnent in the EFCC.

“Therefore, an exit plan for the disengagement of police and other personnel within two years from now should be considered. This will address the issue of no promotion of core staff for over nine years.

“Your Excellency, our thinking here is that whoever you are appointing other than a core staff should be in transitional capacity of two years, during which period arrangement could be made for appointment of any of the core EFCC staff who has been commended by National Crime Agency UK and other international law enforcement for their professionalism.”

Buhari: Corruption present at many levels of government

Receiving the commission’s report, President Buhari expressed disappointment at the prevalence of corruption at all levels of government including the EFCC.

He said the involvement or mention of the very organisation saddled with leading the anti-corruption crusade was an abomination which strikes at the heart of government’s fight against corruption and undermines all efforts to salvage the nation.

He, however, restated his commitment to stamping the menace of corruption out of Nigeria, saying he desires to make the nation a country that has no tolerance for corruption, but one where the menace is vigorously battled.

‘’Corruption is present in all countries. Some governments treat it with levity. Some fight it all the time. I want Nigeria to be counted among those countries that do not tolerate but fight corruption,’’ he said.

In order to protect Nigeria’s political and economic systems, and the continuous existence of Nigeria from the serious threat of corruption, the President asked all stakeholders and indeed every Nigerian to own the fight against corruption at their respective levels.

‘’The sad reality confronting us as a people is that there is corruption almost everywhere; at many levels of government, and nearly every stratum of our society.

“Mindful of the threat that corruption poses to us as a nation, this administration has specifically focused on the fight against corruption.

‘’As a government and in furtherance of our anti-corruption programme, we have since inception engaged in many reforms in removing corruption including but not limited to the enforcement of Treasury Single Account (TSA), strict implementation of the Bank Verification Number Policy and signing unto the Open Government Partnership. A lot of efforts have gone into building and development of our anti-corruption institutions.

‘’We have so far kept faith with our promise and shall remain committed until Nigeria triumphs over the evil of corruption, attain a prosperous economic status and surmounts her security challenges.

‘’However, the stark reality of widespread corruption becomes poignant when allegations of corruption touches on the leadership of an institution set up by law to coordinate and enforce all economic and financial crimes.

“It is an abomination that strikes at the root and undermines the Government’s anti-corruption programme.

‘’It was in response to the serious allegations against the Economic and Financial Crimes Commission that I set up a Ppanel headed by the Honourable Justice Isa Ayo Salami, retired President of the Court of Appeal, via an Instrument dated 3rd July 2020 pursuant to the Tribunals of Inquiry Act (Cap T21, LFN, 2004).

‘’We recognise that there are more grounds to cover in the war against corruption, and we are prepared to go out to possess those lands by cutting off any stream that nourishes the seed of corruption and supports its growth.

But the Acting Chairman of EFCC, Mr. Ibrahim Magu, in a statement through his counsel, Mr. Wahab Shittu, said the recommendations of the panel, including dropping police officers from heading the EFCC, were outside the mandate of the panel.

Magu said he would be vindicated at the end of the day.

The statement: “We wish to state that in view of today’s submission of the much awaited report of Justice Isa Salami-led Judicial Commission of Inquiry to President Muhammadu Buhari, we wish to state with high sense of responsibility that the suspended Acting Chairman of the Economic and Financial Crimes Commission (EFCC), Mr Ibrahim Magu, will be vindicated at the end of the day.

“We observed that Hon Justice Isa Salami, in a televised speech at the Presidential Villa, Abuja, made certain recommendations outside the mandate of the panel and proceeded to make case for the headship of the commission outside the Police Force.

“We wish to state that all over the world, the police is central to law enforcement.

How come that Salami Panel did not say anything on alleged mismanagement of recovered assets, insubordination and abuse of office against Mr Magu?

“We are further alarmed that Salami could in the public glare at the seat of power attack the police as an institution and recommend the exit of police officers from the EFCC within two years.

“We wish to ask at this juncture what happened to the huge amount of money expended by the Federal Government on these police officers in terms of investigations, money laundering and specialised economic crimes.

“Without preempting President Muhammadu Buhari on his decision over the report, we urge the President to make informed decision and do the needful on the matter.”

The statement said Magu has been incorruptible in office.

The statement added: “We also wish to state with high sense of responsibility that Magu remains incorruptible and his stellar achievements in EFCC is unprecedented in the history of the commission.

“We are further urging the general public to take note of these salient points:

*Mr. Magu did not collect any bribe from anybody as we insist that all allegations of diversion of recovered assets leveled against our client were baseless and unfounded.

*Please note that Magu is innocent of all the allegations leveled against him.

*The forfeited assets and the proposed sale is the main reason they are pushing for his removal from EFCC.

*Powerful government officials are not comfortable with Mr Magu’s incorruptible style of leadership. They prefer somebody they can manipulate.

* There is no doubt that Mr Magu must have stepped on powerful toes in the course of doing his job.

*Salami Panel was mandated to sit for 45 days but ended up sitting for about 6 months.

“We also anchor our position in view of the following incontrovertible facts:

In the past, many false stories against Magu had featured in the public space only for such unfounded allegations to collapse like a pack of cards during the proceedings of the Salami panel.

“These false allegations include:

“For the avoidance of doubt, the FCMB publicly confirmed through press statements and advertorials that there was an error entry and apologised during the proceedings.

No Evidence of Diversion or Illegal Sale of Forfeited Assets.

No Link of Laundered Funds by BDC Operators traced to Magu

No Allegation of Bribery Established Against Magu

No Proof that Funds in the TSA account with CBN missing

No Interest on Funds lodged in TSA Account with CBN

How Ndoma-Egba’s wife, six others died in road accident