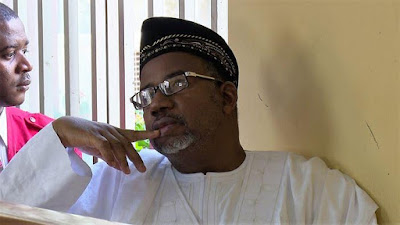 The Economic and Financial Crimes Commission says it has seized14 properties located in “choice areas” of Abuja traced to the immediate past Minister of the Federal Capital Territory, Mr. Bala Mohammed, and his son, Shamsuddeen.

The EFCC stated this in a court application filed by one of its prosecutors, Mr. Ben Ikani.

The application, filed before the Federal High Court in Abuja on September 11, 2017,   sought the interim forfeiture of the properties.

The anti-graft agency stated that although it had “recovered and seized” the properties, they could not be forfeited to the Federal Government without a court order.

The EFCC stated that both Mohammed and his son “have denied ownership and connection” to the properties.

But the commission maintained that “preliminary investigation has revealed that the properties listed on the schedule are unlawfully acquired through corrupt practices by the former minister and his son while in office as the Minister of the Federal Capital Territory.”

The properties, according to the EFCC, included one “mansion” located at Sunrise Estate, Asokoro, Abuja; and three sets of four-bedroomed semi-detached duplex at Green Acres Estate, Apo-Dutse, Abuja.

Others were two sets of four-bedroomed fully-detached duplexes each with boys’ quarters on Gana Street, Maitama, Abuja, a trekable distance to Transcorps Hilton Hotel Abuja.

Title documents attached to the EFCC’s application stated that some of the facilities in some of properties included “excellent road and drainage network; dedicated transformer; borehole for constant water supply; fitted kitchen, bedroom cabinet and wardrobes; ample parking space; and children playing ground.”

The rest of the properties are plots of land in six different locations in Abuja.

Already, the EFCC is prosecuting the former minister before a High Court of the Federal Capital Territory, Gudu, Abuja, on six corruption-related charges, and his son, Shamsuddeen, before the Federal High Court, Abuja, on 15 counts of money laundering and failure to declare some assets.

The charges against Shamsuddeen involve about N1.1bn.

Two high courts in Abuja had in February ordered the former minister and his son to forfeit 10 properties located in Jabi, Garki, Maitama and Jahi and other areas of Abuja.

But the EFCC stated in its fresh application that “the crux of this application is that the respondents are being investigated for offences bordering on abuse of office, land scams, corruption and corrupt practices, money laundering and diversion of revenue of government while being the Minister of the Federal Capital Territory, Abuja.”

It also stated that the properties traced to the father and son were “reasonably suspected to be proceeds of unlawful activities and crimes, kept and concealed in the names of the proxies and nominees of the former Minister of the Federal Capital Territory, Senator Bala Mohmmed, and his son, Shamsuddeen Bala Mohammed, and for their benefit.”

According to the EFCC, the properties were held in the names of different companies and one Maimuna S. Aliyu.

The commission described Aliyu as Bala’s proxy allegedly used to acquire the houses 1A and 2A of No. 7 Gana Street Maitama, Abuja.

The companies, in whose names some of the properties were said to be held, are Intertrans Global Logistics/Bird Trust Agloallied Limited, Gal Vac Mining Limited, and Diakin Telecommunication Limited.

The commission also alleged that Bala, while in office as the FCT minister, appointed one JemilaTangaza as Special Assistant and, thereafter, Director of Abuja Geographic Information System (A018) “to facilitate fraudulent allocations of plots of land to her and her proxies and nominees in choice areas.”

The commission alleged that the plots of lands were sold and their “proceeds laundered in the acquisition of some of these houses like House No 9 Plantinurn White Estate Abuja, acquired in the name of Mohammed Musa.”

It said Intertrans Global Logistics Ltd was linked to the son of the former minister, Shamsuddeen.

The affidavit filed in support of the forfeiture application read in part, “That investigation revealed that the former Minister of the Federal Capital Territory, Senator Bala Mohammed, and his son are the owners and beneficiaries of Diakin Telecommunications Ltd, which they used to acquire House FS1A, Green Acres Estte, Apo-Dutse, Abuja, and  No. FS1B Green Acres Estte, Apo-Dutse, Abuja, while Senator Bala Mohammed was Minister of Federal Capital Territory. A copy of the sales agreement between Abuja Investment Company Limited with Diakin Telecommunication Ltd in respect of the houses at FS1A and FS1B is hereby annexed and marked as exhibits EFCC A1 and 2.

“That investigation revealed that the former Minister of the Federal Capital Territory Abuja, Senator Bala Mohammed, and his son are the owners and beneficiaries of Bal-Vac Mining Ltd, Bird Trust Nig Ltd and Intertrans Global Logistics Ltd which they used to acquire houses and plots of land in choice areas in the Federal Capital Territory Abuja, particularly Houses 1A and 2A of No. 7 Gana Street, Maitama, Abuja; House FS2B Green Acres Estate, Apo-Dutse, Abuja, respectively. A copy of the Sub-Lease Agreement in respect of houses number 1A, 2A & FS2B is hereby annexed and marked as Exhibits EFCC A 6, 7 and 8 respectively.”