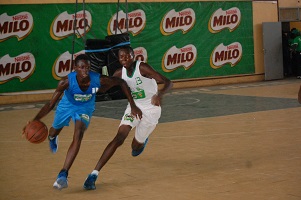 Currently, in its 20th edition, the 2018 MILO Basketball Championship commenced earlier in the year with State Preliminary Games after the National School Sports Federation (NSSF) registered over 9, 000 schools across the 36 States and FCT Abuja. Out of these over 9, 000 schools, 74 schools comprising of both Boys and Girls teams qualified for the regional conferences which held in Benin, Abuja, Ilorin, and Ibadan, over a period of four weeks.

Throughout the two decades of the Championship’s existence, MILO Basketball Championship has played a crucial role in grassroots sports development in Nigeria and Nestle Nigeria has remained committed to sustaining this development since the inception.

MILO uses sports as a metaphor to teach schoolchildren important life skills such as determination, confidence, discipline, teamwork, and respect. This stems from the belief that schoolchildren who are physically active in exercise and sports are most likely to do well all-around.  The championship is organized by Nestle Nigeria Plc in partnership with Nigeria Schools Sports Federation (NSSF) with technical support from National Collegiate Sports Foundation (NCSF) and the Nigeria Basketball Federation (NBBF)