Kindly Share This Story:
El Marino Sports Club of Lagos on Sunday defeated Matured Minds  Football Club (MM FC) also of Lagos by a lone goal. The penalty goal was scored in the second half by Adetokunbo Modupe after an El Marino player was savagely brought down in the 18-yard box of MM FC. 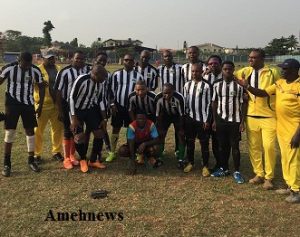 Members of El Marino Sports Club, Lagos
The game which started on a very conscious note witnessed superior technical display by the El Marino team which dominated the match throughout the 90 minutes game.
Speaking at the end of the match, the Team Manager of El Marino Sports Club, Otunba Seyi Adefarati, appealed to Nigerian adults to heed the World Health Organisation (WHO) call ‘to get up and get active.’
Furthermore, Otunba Adefarati revealed that the WHO in a recent document expressed concerns that ‘less people are active in many countries, with nearly a quarter of all adults and more than 80 percent of adolescents being too sedentary.’
‘Sedentary life style is a major cause of many diseases. That is why we at El Marino will continue to encourage adults to participate in sports and other physical activities,’ Otunba Adefarati said.
According to him, ‘people who are physically active improve their muscular and cardio-respiratory fitness, as well as their bone and functional health. They have lower rates of coronary heart disease, high blood pressure, stroke, diabetes, cancer (including colon and breast cancer), and depression.’
The El Marino Team manager also affirmed that people that are physically active have a lower risk of falling, are without hip or vertebral fractures and are more likely to maintain their weight.
‘More than 60 minutes of physical activity a day brings additional health benefits. Adults aged 18 to 64 should do at least 150 minutes of moderately intense physical activity each week or at least 75 minutes of vigorous activity throughout the week or an equivalent combination of moderate and vigorous activity,’ Otunba Adefarati affirmed.