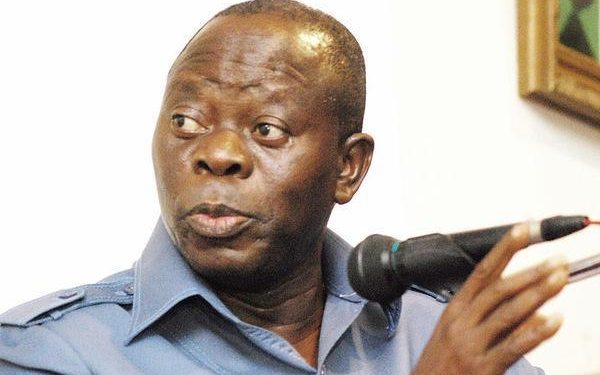 The All Progressives Congress (APC) has challenged the People’s Democratic Party (PDP) to be ready for a real election, where votes will count and not banking on using guns.

The National Chairman of the ruling party, Comrade Adams Oshiomhole, who gave the challenge in Abuja during the inauguration of the party’s National Campaign Councils for Kogi and Bayelsa states governorship elections yesterday, particularly charged the PDP in Bayelsa State not to turn the election into a war.

According to the party chairman, the APC takes the elections in the two states seriously because it believes elections are won through the ballot and not through the barrel of guns, noting that the electoral culture in Bayelsa State had not conformed much to the universally accepted electoral processes, but had been mostly threatened by arms violence.

Announcing the governor of Kaduna, Mallam Nasir El’rufai, and his Jigawa state counterpart, Governor Abubakar Badaru, as the chairmen of Kogi and Bayelsa states campaign councils respectively, Oshiomhole charged the opposition party to brace up and be ready for real elections in both states.

He said: “For us in the APC, we take these two elections very seriously because we believe in the power of the ballot. We believe that the issues should be contested in a peaceful environment, not by the power of gunshots, which has been the tradition of the opposition, and we know that the people of Bayelsa want a change, and I am sure, Your Excellencies, that change will come 16 November, less than a month from now.

“We set up these two committees to complement the ones already set up in the two states, which you can describe as local organising committees. We are setting up these ones because we believe that we need to deploy all our human resources and all our governors, having experience around elections, they know what the issues are, to reinforce the initiative by our party in Bayelsa and in Kogi and ensure that the elections go smoothly.

“All APC governors are expected to participate in these election National Campaigns Councils for Kogi and Bayelsa. We have also nominated some ministers, senators, some young men and women in the council.

“That of Kogi will be chaired by someone who has made history, Mallam Nasir El’rufai, and Governor Abubakar Badaru of Jigawa State will chair the committee for Bayelsa State. There’s going to be a formal inaugural meeting which the chairmen of the two committees will convene to discuss all the logistics strategies and all.

“Let me use this opportunity to assure our opponents that we are ready for campaigns. It’s not a fight, it’s not a war. The only thing we will insist on is that this time around, the votes must count, because Bayelsa are not used to votes being counted. This time, they have to be encouraged to recognise that the votes will not only be cast in a free and fair atmosphere, they must determine who wins, not the power of the barrel of the gun.

“I want the PDP to take note of that and try and learn new tactics of winning votes rather than fighting war.”