Deloitte suggests that the keys to success in the Electric vehicles (EV) market will be building a recognised electric-only brand (look at how dominant relatively small Tesla has already become with this strategy); focusing on keeping customers happy with their purchase; and ensuring that they can secure an efficient and affordable supply of batteries from largely Asian-based battery makers.

Even taking those recommendations into account, Deloitte sees a tempestuous future ahead for the big car makers of today. “With a substantial increase in the level of EV production expected over the next decade, the number of potential manufacturers appears genuinely unsustainable,” said Deloitte’s North West Europe automotive leader Mike Woodward.

“If, as expected, supply significantly outstrips demand then something will have to give. Our expectation is that the market will find a way to normalise itself at the expense of the manufacturers.”

The Carbon Tracker Initiative 2017 report indicated that by 2025, the Electric vehicles (EV) would displace about 2 million barrels of oil per day and in 2050 it will reach 25mbd of oil per day.

In London, the Metropolitan Police Service have begun rolling out a fleet of 700 EVs to help combat air pollution 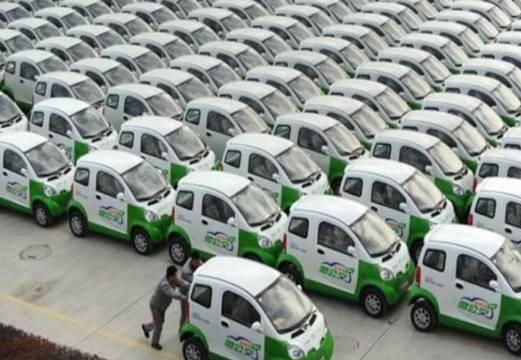 According to the report by Syed Mansur Hashim disclosed that the world is still playing catch up with China when it comes to electric vehicles (EVs). According to the Forbes magazine, Chinese manufacturers produced and sold 770,000 EVs in 2017, which is a jump of about 53 percent over 2016. This phenomenal growth has been made possible by a very hefty and generous subsidy policy coupled with manufacturing incentives to EV companies and most importantly, subsidies to consumers who buy EVs. And it is not just passenger vehicles we are talking about here. Forbes reported in 2018 that “while electric bus sales in China were slightly lower last year as a result of cuts in electric bus subsidy program, 99% of the 352,000 electric buses on the road globally are running on China’s streets and roads. There are now over 30 companies making electric buses in China.”

Besides providing subsidies, the Chinese government has introduced policies like guaranteed vehicle license which is a major issue because Chinese metropolises like Beijing have put caps on the number of vehicle licenses (for regular petrol/diesel run vehicles) to just 3,000 annually and the rest of the applications go into a lottery pool. With three million vehicle license applications going into a lottery system, people may need to wait years for a license. People buying EVs are exempted from this system altogether. The average subsidy provided by the government is about USD 10,000 per vehicle and China’s central and local governments dished out USD 7.7billion in EV subsidies in 2017.

Pollution is China’s greatest headache and the smog in big cities is creating major public health issues. But obviously subsidies of such magnitude cannot continue forever and Chinese policymakers are introducing legislation in 2019 to force better fuel efficiency. Under these new rules, auto manufacturers will have to have engines with an average fuel economy of 42 miles per gallon (mpg) by 2020 and 54.5mpg by 2025. Those car manufacturers which fail to meet these standards will acquire negative credits, which if they reach critical numbers have to be offset by buying positive credits from other companies (a major drain on revenue) or cut the production of fuel-driven cars. While it is the intention of the government to phase out the generous subsidies on EVs, the policy thrust is to get EVs to have longer ranges and greater battery pack densities. This is where Chinese policymakers are forcing systemic changes in the auto industry.

To propel the EV automobile industry, China wants to become king of EV batteries. Today there are only a handful of battery suppliers. Among them are big names like Panasonic, Samsung, LG Chem and the Gigafactory jointly owned by Panasonic and Tesla, and finally BYD, a Chinese venture where Warren Buffet, the American billionaire has substantial investments. Now according to Bernstein (a Wall Street research firm), EVs will dominate as much as 40 percent of the global vehicle market in 20 years time. If global vehicle production remains roughly the same as today, 40 million out of 100 million vehicles produced will be EVs! Those are serious numbers. Research points to a scenario when the EV batteries will cost the same as a combustion engine in the two-decades-from-now scenario, we are looking at a battery market worth USD 240 billion annually. China is most certain to lead in the investments needed to produce a large percentage of those batteries.

Already we are seeing the first of the mega-sized battery producing plants (Gigafactories) being established. Today, the manufacturing capacity has doubled over the last three years to 125GWh (gigawatt-hour), and as reported by Forbes in 2017, manufacturing capacity “is projected to double again to 250GWh by 2020. Even that will not be nearly enough. Total cell production capacity will need to increase tenfold from 2020 to 2037, the equivalent of adding 60 new Gigafactories, during that period.” The original batteries were developed in Japan. Then came the South Koreans with further innovation and now, the innovation is being done in China. The large-scale adoption of EVs in China is propelling this phenomenal growth in battery technology and manufacturing base. Indeed, experts contend that China’s global share is battery production is slated to rise above 70 percent by 2020.

China and more recently India, both countries having massive populations and very large conventional automobile industries are moving towards EVs on environmental grounds. It would be premature to expect Bangladesh to follow suit. However, Bangladesh does have companies that produce batteries, some of which have actually gone international. Our companies should seriously look into the prospect of attracting foreign investments to set up the sort of battery manufacturing plants being envisaged for the Chinese market. After all, if the projections are correct, we could be looking at 40 million EVs being sold yearly two decades down the line. There is no reason to believe that battery prices will not come down significantly when mass produced, especially on the scale being talked about here. The expertise for producing international standard batteries already exists in Bangladesh. Our manufacturers should start eyeing this segment now, as opposed to 20 years from now.