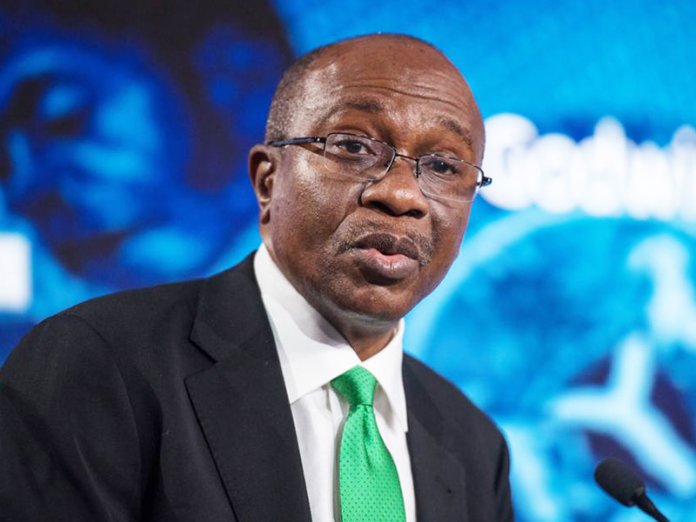 Central Bank of Nigeria (CBN) Governor, Mr. Godwin Emefiele, has said despite the damage the COVID-19 pandemic is causing nations around the world, it presents an opportunity to birth “a new Nigeria.”

Emefiele, in a 27-page speech, described the disruptions caused by the pandemic as an opportunity to re-echo “a persistent message the CBN has been sending for a long time.”
The message, he said, was the need for Nigerians to start looking inwards as a nation to guarantee food security, high quality and affordable healthcare and cutting-edge education for citizens.

According to him, for a country of over 200 million people, projected to be almost 450 million in a few decades, “we can no longer ignore repeated warnings about the dangers that lie ahead if we do not begin to depend largely on what we produce locally because the security and well-being of our nation is contingent on building a well-diversified and inclusive economy.”

Emefiele noted that when he assumed office in June 2014, importation of fish, rice, wheat, and sugar alone consumed N1.3 trillion worth of foreign exchange but the apex bank under his leadership took steps to reduce the amount.

“In line with the vision of President Muhammadu Buhari, CBN has indeed created several lending programmes and provided hundreds of billions to smallholder farmers and industrial processors in several key agricultural produce.

“These policies are aimed at positioning Nigeria to become a self-sufficient food producer, creating millions of jobs, supplying key markets across the country and dampening the effects of exchange rate movements on local prices,” he explained.

This philosophy, according to Emefiele, has been the consistent theme of the CBN’s policies over the last couple of years, just as he cited the restriction of access to foreign exchange from some items at its window.

Emefiele said: “Many times, the bank has been accused of promoting protectionist policies. My answer has always been that leaders are first and foremost accountable to their own citizens.
“And if the vagaries of international trade threaten their well-being, leaders have to react by compelling some change patterns of trade to the greater good of their citizens.

“That is why in response to COVID-19, we are strengthening the Nigerian economy by providing a combined stimulus package of about N3.5 trillion in targeted measures to households, businesses, manufacturers and healthcare providers.”

He said the measures were deliberately designed to both support the federal government’s immediate fight against COVID-19 and also build a more resilient, more self-reliant Nigerian economy.

“We do not know what the world will look like after this pandemic. Countries may continue to look inwards, and globalisation, as we know it today may be dead for a generation,” he stated.

Therefore, he stressed the need for Nigerians to support the federal government in its quest to deliver high-quality infrastructure, support large-scale production of staple and cash crops in the country and develop the educational sector, among others.

He also said the apex bank had designed policy response timeline to guide the management of the crisis and help in rebooting the economy.
Emefiele explained that once the health authorities determine that the COVID-19 transmission curve had been flattened and the ongoing restrictions were eased, CBN would unfold policies to help reposition the economy.

He said the bank would reinvigorate its financial support for the manufacturing sector by expanding intervention all through its value chain.
In addition, he said with the support of the federal government, CBN would embark on a project to get banks and private equity firms to finance home-grown and sustainable healthcare services that would help reverse medical tourism.

CBN would also promote the establishment of a N15 trillion InfraCo Plc, which he said would be wholly focused on Nigeria and managed by an independent infrastructure fund manager.

“This fund will be utilised to support the federal government in building the transport infrastructure required to move agriculture products to processors, raw materials to factories and finished goods to markets, as envisaged by the CBN ‘Going for Growth’ roundtable in March 2020.’
He said the bank would also focus on four sectors to stimulate job creation.

He listed them to include light manufacturing, affordable housing, renewable energy, and cutting-edge research.

“In manufacturing, for example, it is pertinent to note that Nigeria’s gross fixed capital formation is currently estimated at N24.55 trillion, made up of residential and non-residential properties, manufacturing and equipment, transport equipment, land improvement, research and development and breeding stocks,” he explained.

Additionally, he said CBN would pursue the creation of a fund that would target housing construction for developers as well as support the financing of energy production over the next three years.
“COVID-19 may have plunged us into a crisis of unprecedented proportions, but as Winston Churchill once admonished, we must never let a crisis go to waste,” Emefiele said.