The 19th Edition of the NNPC National Science Quiz Competition came to an electrifying end Thursday in Abuja with the representative of Ogun State emerging the overall winner of the annual NNPC flagship Corporate Social Responsibility (CSR) initiative. 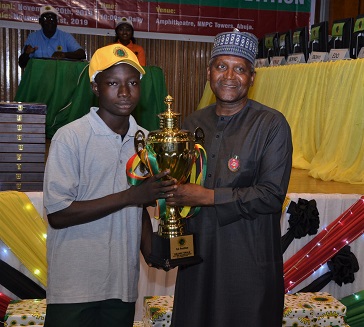 Master Ojo finished with 75 marks ahead of Master Mbazu Chinonso of Ebonyi State who emerged second-place winner and Master Great Ugochukwu of Abia State who had completed the race in third place position. 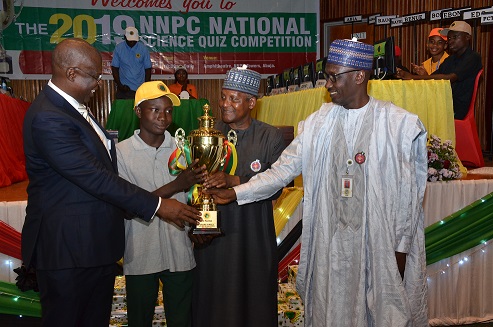 Chief Sylva in his remarks commended NNPC for sustaining the competition through the last two decades and for bringing innovation to it, year-in-year out while urging other agencies in the Ministry of Petroleum Resources to emulate the NNCP example.

The Minister explained that corporate organisations need to give back to communities, noting that it is in their enlighten self-interest to do so.

“It gives companies the license to operate. In the Oil and Gas Industry in particular, giving back to the communities is imperative to get the support of the local community and guarantee smooth exploration and production activities,’’ he said.

Welcoming participants and guests to the amphitheater of the NNPC, Group Managing Director of the corporation, Mallam Mele Kyari, said that NNPC would not only sustain the sponsorship of the annual national quiz contest but would constantly seek innovative measures to improve the competition whose ultimate aim is to encourage students in the study of Science, Technology, Engineering and Mathematics (STEM) related subjects.

Kyari observed that through the years, the quiz competition which was first held in 2000 had also helped to break down long-held stereotypes and engender a better sense of national being in participating students through cross-cultural interactions that the contest offers.

Entrepreneur extraordinaire and President of Dangote Group, Alhaji Aliko Dangote, in his remark noted that since its inception, the NNPC National Science Quiz Competition had groomed a set of next generation of scientists and young leaders of thought set to be at the vanguard of innovation and industrial growth.

He said as the world moved ever faster into the period of the fourth industrial revolution, emerging economies like Nigeria needed agile-minded scientists and technicians who can think outside the box in the quest for solutions to the Country’s unique challenges. 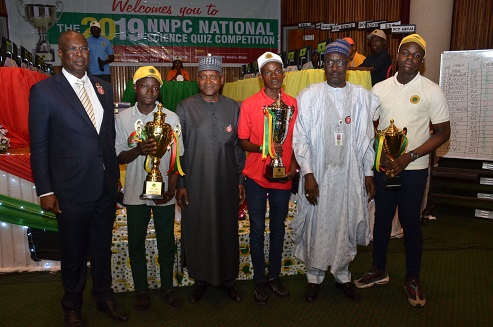 Dangote said that by engaging these youths in the competition through the years, NNPC was living up to its expectations, defining a noble path for the future well-being of the participating youths.

“I can only encourage the corporation not to rest on its oars on this laudable initiative and others through which the company impacts on its publics across the Country’’ he said.

On his part, the winner of the competition, Master Ojo, commended NNPC for providing the platform which has enabled teeming youths like him to achieve their dreams and academic ambitions.

He implored the national oil company to keep the flag-flying so that young Nigerians would continue to find succor in the annual quiz contest.