The last may not have been heard on the alleged burning and looting of the corporate headquarters of Nigerian Ports Authority (NPA) in Lagos, as both the Managing Director (MD) of the Ports Authority, Mrs. Hadiza Bala-Usman and the Board Chairman, Chief George Rickets, have sharply disagreed on the damage done by the torching of the facility by the hoodlums who hijacked the recent EndSARS protest in the country. 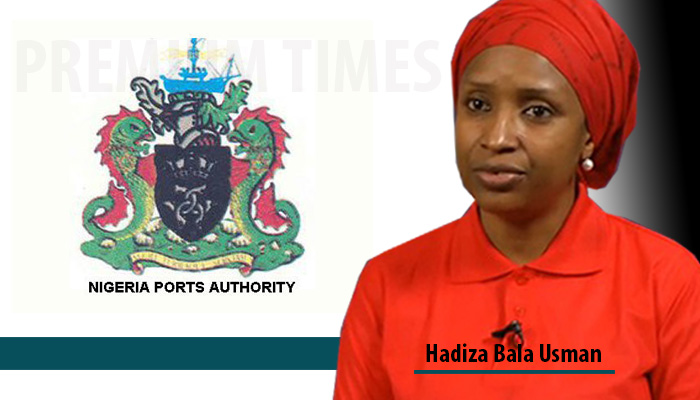 The MD and the Board Chairman also disagreed on how the burning of the part of the NPA headquarters and destruction of its facilities at the Tin Can Island Port would affect the operations of the Ports Authority and the port economy in general.

Apparently reacting to an earlier statement credited to Chief George Rickets that the attack on the NPA House and its facilities in Tin Can Island Port, could disrupt the Ports Authority’s operations and that of the entire port economy; Hadiza on Sunday, in her first ever public comment more than one week after the incident took place, she said; “The situation has not affected operations of the authority in any way as we have continued to render our services unhindered.”

Our Correspondent reports that though the MD’s belated assurances has doused the fears of possible disruptions of ports activities, it has also to a reasonable extent challenged the audacity of the Board chairman to speak on the matter before the managing director, even though she may have gone missing for over a week since the dastardly attack took place.

Analysts say the Hadiza’s clarifications have also raised other fundamental issues, such as who carried out the attack, as she had reportedly linked the attack to both unknown persons and hoodlums.

A statement that has lent credence to allegations that the arson may have been an insider’s job, presumably undertaken to conveniently pass the blame on the hoodlums that went on destruction and looting spree during the EndSARS protests by Nigerian youths.

The Ports Authority had also in a statement by its General Manager, Corporate and Startegic Communications, Engr. Adams Jato, blamed the attacks on the NPA’s Tin Can Island facilities and the NPA House by unknown persons and hoodlums.

However, the MD’s position has confused observers as the Lagos State Police Command had last week announced that a large number of the hoodlums who perpetrated the acts of arson and looting during the protests, have been arrested and charged to court.

Observers further fear that the overall views and assessment of the damage done to the authority’s facilities by the managing director and that of the Board chairman could be a pointer to a cover up, a concern that is accentuated by the NPA helmsman’s display of lack of urgency in making a public statement on the incident.

The statement reads in part: “The management of the Nigerian Ports Authority regrets the attack on the Tin Can Island Port and its 26/28 Marina Road, Lagos, corporate headquarters by unknown persons on Tuesday October 20th and Wednesday October 21st, 2020 respectively.

“The attack on the Tin Can Island Port commenced at 9:45am on Tuesday October 20th 2020. According to the source the hoodlums made an attempt to forcefully gain access into the port, attacked the administrative building and set ablaze a truck which was evacuating cargo.

“The attackers at the headquarters numbering over 300 persons, gained access into the premises at 8:42am on Wednesday October 21st 2020 from the outer Broad Street wing brandishing daggers, sticks and cutlasses.”

The authority said the attackers disarmed and chased away security personnel on duty out of the headquarters premises, and thereafter, “proceeded to burn and vandalise several vehicles belonging to the authority and some members of staff”, after which a wing of the office building was reportedly set on fire.

“After an assessment of the extent of damage, it was discovered that apart from the annex wing that was burnt, many offices were vandalised, while computers, printers, water dispensers and other electronic devices were looted.

“A total of Twenty-seven (27) vehicles, including cars, utility vehicles, pick up vans and staff buses were set on fire, while Thirty-three (33) other vehicles, twenty-two of which belong to members of staff were vandalised. A Toyota Prado SUV, a Bajaj Motorcycle and one Hilux patrol van were also stolen from the premises.”

It will be recalled that NigeriaMaritime 360, an industry news medium, reported that Rickets had in a statement said the EndSARS protest attacks on the authority’s facilities will affect its operations as well as affect ports economic activities.

Chief Rickets was quoted as saying that “while the youths have the rights to protest, it has become obvious that the peaceful protest was hijacked by criminal elements. The destruction of a critical facility such as the NPA building will affect the nation’s economy.

“The NPA belongs to all Nigerians and as an import dependent nation; it is the port that feeds the whole nation. If they start pulling down critical structures of this nature, where do they expect the government to get the funds to meet their demands? He queried

It is however noteworthy that the Port Authority said that all its assets are comprehensively insured, and informed that “insurers are currently undergoing an assessment of the damages.”