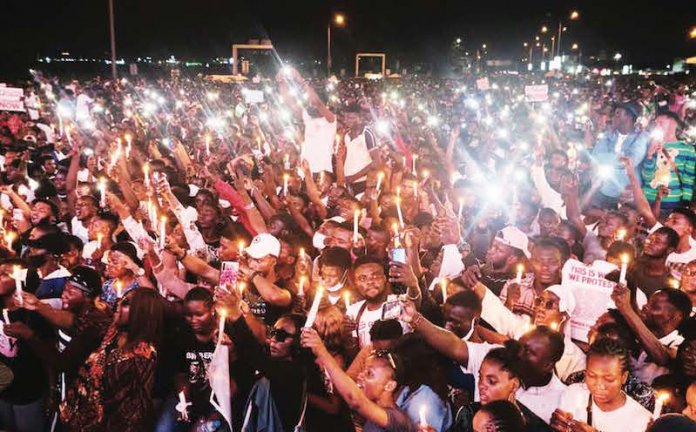 Vice President Yemi Osinbajo yesterday pleaded with EndSARS protesters to sheath their sword, promising that the federal government is working on a number of measures to revamp the police and end brutality by its personnel.

In a series of tweets on his verified Twitter handle late yesterday, Osinbajo admitted that far too many people had been brutalised by the police and that it was unacceptable, adding, “we must take responsibility for protecting young people, even sometimes from those who are paid to protect them.”
The Vice President said he had been following the protesters who have been demanding an end to police brutality, and has had a number of discussions with key people in the administration which the protesters deserve to be informed about because “transparency, after all, is a key tenet of government.”

Osinbajo said: “Dear Nigerians, I know that many of you are angry, and understandably so. We could’ve moved faster and for this we are sorry. I fully understand how many young people feel. Many feel that we have been too silent and have simply not done enough. These feelings of frustration are justified.

“We understand that you want to see action from us and I’m here to tell you that work is ongoing. I chaired a meeting of 36 state governors and the Minister of the FCT (NEC), where we resolved to set up judicial panels of inquiry so we can see justice served, and fast; the reason being that only state governors, by law, can set up judicial inquiries in their states. The hearings will be public.

“With Mr. President’s approval, SARS has been completely disestablished, and none of its former members will feature in any police tactical units. I am sending my deepest condolences to the families of Jimoh Isiaq, and all those who have lost their lives at the hands of wayward police officers. To those injured, I wish a full and speedy recovery.

“We also understand that the issues that you’re raising are bigger than just SARS. They’re deep and systemic and we’re undertaking comprehensive measures that will revamp the police by addressing issues of welfare, service conditions and training. We will continue to update and engage with you all on these action steps and the ones to come, in the spirit of transparency, so that you can hold us accountable. We are, after all, here to serve you and we owe you a duty to win back your trust.

Meanwhile, five people lost their lives at different locations yesterday as the #EndSARS protest entered the ninth day. The casualties were recorded in Edo, Lagos and Ondo states.
At least two persons died when hoodlums attacked the protesters at Ring Road, Benin.
The hoodlums, who stormed the venue of the protest, armed with machetes and other weapons unleashed mayhem, leaving other protesters scampering for safety.

Some individuals selling tickets at the Ring Road Motor Park in Benin were fingered for the security breach. Their attacks were attributed to their frustration over low patronage since the beginning of the protest, which has continued to keep passengers away from the motor park at the Edo State capital.
Edo State Governor, Godwin Obaseki, confirmed the killings without giving the exact number of casualties. He, however, said “lives” were lost.

In a series of tweets after the incident, the governor condemned the attack on #EndSARS protesters.
He said, “I have just learnt that hoodlums have attacked #ENDSARS protesters, who have conducted themselves peacefully in Benin City. I extend condolences to the familes of those who lost their and wish others who were injured quick recovery.”

In a related development, the Lagos State Police Command yesterday announced the death of two persons in a road accident that occurred during an #EndSARS protest in the state.
The Command’s Public Relations Officer, Olumuyiwa Adejobi, made this known in a statement.
He said one of the #EndSARS protesters, identified as Nike, had been arrested for driving recklessly and for allegedly killing two Nigerians at Ikola Road, Alagbado.

The PPRO noted that the bodies of the victims had been deposited at the morgue.
Adejobi said, “Mrs Nike Lawal, was the driver of Toyota 4Runner SUV with REG. NO. GGE 346 BK that ran into a tricycle and killed the duo of Ojo Azeez, m, 27 years and Yusuf Sodia, m, 26 years, both of Command Road, Alagbado, Lagos State.

“Ojo and Sodia both in the tricycle died on the spot. The suspect, who intentionally removed the number plates on her SUV, shortly after the accident, had joined the protest at AIT junction, Alagbado, and started driving recklessly before the fatal accident.
Adejobi also said the command had arrested and commenced orderly room trial of the four policemen who were caught assaulting a young lady protester in a viral video at Surulere on Monday.

He said the policemen are Inspectors Bagou Micheal, Ekpoudom Etop, Nnamdi Makita and Akinyemi Benson.
“The policemen, who are attached to the Divisional Police Headquarters, Surulere, Lagos State, are cooling off in the cell while the orderly room trial continues. CP Odumosu has also ordered the arrest of the policeman who slapped an aged mother in another viral video at Iyun Street, Surulere, on the same day,” he added.