The importance of entrepreneurship in enhancing the manufacturing sector cannot be over-emphasized as it is pivotal to the industrial development of advanced countries and would assist Nigeria in alleviating poverty, improving the living standard and reducing unemployment. 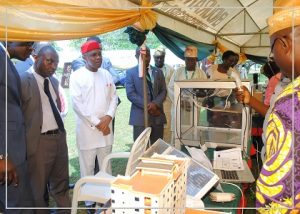 “They added that this involves risk-taking, innovation, arbitrage and co-ordination of factors of production in the creation of new productsor services for new and existing users in human society. 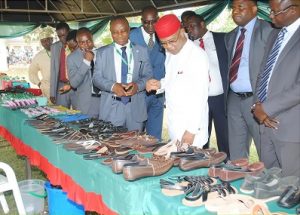 Peter Drucker defined it as ‘a systematic innovation, which consists in the purposeful and organized search for changes, and as the systematic analysis of the opportunities such changes might offer for economic and social innovation.’

Schumpeter describes the entrepreneur as the bearer of the mechanism for change and economic development, and entrepreneurship as the undertaking of new ideas and new combinations.

Jacobs said a successful entrepreneur should possess the following characteristics:

President reiterated that entrepreneurship is a catalyst for the growth of the manufacturing sector in Nigeria because, once the entrepreneurial spirit is developed, transformation into a particular line of business, say manufacturing, would not be too difficult, provided the right orientation, training, advice and support services are available.

He pointed out that entrepreneurship could assist in curbing the over-dependent nature of the economy on imported raw materials, technology and even finished products. Nigeria imports everything from raw materials, machinery to finished products. Nigeria’s chronic dependence on imports is a result of many decades of misdirected policies that swamped local industry and wiped out diverse avenues of employment and wealth creation.

MAN commends the present Administration for adopting the resource-based industrialization policy for the country. This would assist in reducing the country’s over-dependence on imported inputs for the manufacturing sector.

NAM Boss attributed local sourcing increased from 48 percent in 2013 to 52 percent in 2015 to the backward integration policy of the Government. The policy would enhance productivity in the manufacturing sector and reduce the import bill of the country, he noted.

In order to successfully achieve this objective, NAN urged government to create attractive incentives for investors, including our entrepreneurs, who would intensively undertake the comprehensive development of the agricultural, solid minerals, petroleum and forestry sectors as these would provide the needed inter-industry linkages for the production of raw materials for the manufacturing sector.

“Nigeria also effectively needs policies that would foster rapid business development across sectors that give an enterprise revolution that would accelerate sustainable economic growth through the development of a group of entrepreneurs that would focus on the creation of locally relevant technological and technical expertise. 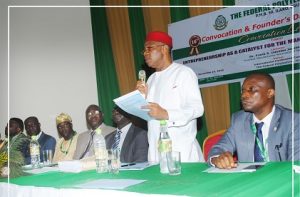 A major issue in the development of entrepreneurship as well as micro, small and medium scale industries, to which most young graduate would belong, is the inappropriate curricula of our higher/technical education system as well as the absence of appropriate skills which would facilitate the boosting of, and acquisition of requisite skills for entrepreneurship development. This challenge is exacerbated by the near absence of adequate and well-funded research institutions and innovation systems.

Developing nations which include our dear country, Nigeria, would have been better positioned in the game of global entrepreneurship development if, rather than exclusively focusing on catching up with modern technological frontiers, looked inward to deploy existing local indigenous science and technology.  This is with a view to developing appropriate innovations in areas where Nigeria had comparative advantage that would then be developed into competitive advantage. This strategy would have provided significant opportunities for local economic transformation, and by extension, build up the capacity for entrepreneurship development for budding entrepreneurs as well as manufacturers, especially the small scale ones.

A major challenge is the absence of a national innovation system which should serve as a link between research efforts, application/adaptation and their outcome. Given the low level of indigenous technology, Nigeria has to rely on the inflow of technology from outside through direct importation/adaptation, foreign direct investments or research and development. This is important because there is a threshold of technology that is required to drive entrepreneurship and industrialization at any given rate. Nigeria, therefore, has to use all available channels to build up her technological base as technology fast-tracks entrepreneurship development.

The low level of the innovation system may have arisen from the state of our educational system which is not fundamental enough and which does not place adequate emphasis on science or even technical education. In a situation like that, building up an innovation system would be difficult.

Industrial Development and the Manufacturing Sector

Globally, industrialization, marked by manufacturing, was at the heart of most growth economies. It was central to the economic growth and development achieved by the advanced industrial economies such as the United States of America, Germany, Japan, etc.  It is also the reason for the high development recorded in these countries in terms of high human value and quality of life. This is because a strong and vibrant industrial sector creates massive employment opportunities and high income for the society.

Manufacturing has historically been the driver of industrialization, structural change of any economy and catch-up amongst nations. Today, through manufacturing, China, Singapore, Malaysia and South Korea are catching up fast with the United States, Germany, Japan and the United Kingdom – the foremost industrialized nations in terms of income and wealth, standard of living and international recognition. Manufacturing, being the heart of industrialization is central to income growth and society’s welfare. Empirical evidence indicates that most industrialized nations of the world are strongly associated with high per capita income and good quality of life, which is made possible by the vibrancy of their manufacturing sectors that create multiple job opportunities for their people.

“Industrialization is widely believed to be a catalyst for rapid growth and development of any economy and as a process, presupposes the provision of appropriate institutions by the state to actualize it. It is considered a necessity in most economies for it accelerates the process of both economic growth and development.

“The Nigerian Government embraced industrialization after independence, and successive administrations in their quest to industrialize the economy, introduced various industrial policies to facilitate the process. The need to fast-track the process became imperative because, despite the abundant natural and human resources the country was endowed with, and projected population increase, the Government could not rely much on the exportation of unprocessed agricultural produce for its income. This prompted the Government to adopt import substitution industrialization (ISI) as a development strategy which was aimed at reducing the importation of finished goods in favour of local production of such goods. This was aimed at creating employment opportunities for the teeming Nigerian work force, wealth creation and mobilization, transfer of technology and empowering Nigerians.

“Government to her credit also introduced other industrial policies in order to fast-track the industrialization process.

He also said in addition, some incentives and reforms were introduced to support the industrial sector and encourage investment are included:

While the reforms include:

More recently, there have been other reforms, such as:

“The various reforms were helpful in the industrialization process and in the transformation of Nigeria from an agrarian community to a semi-industrial economy as is evidenced by the growth of the manufacturing sector. A major challenge was that government did not carry major stake-holders along in formulating the policies while others included: abrogating the policies midstream, absence of appropriate linkages between the various sectors of the economy, such as between the agricultural, solid minerals and forestry sectors which would have synergized with the manufacturing sector to produce needed raw materials, non-adoption of resourced-based industrialization and consequent over-reliance on imported raw material inputs, untimely introduction of some policies like the Power Reform Act, etc.

Jacobs said Nigeria is a country of significant potentials and opportunities, with over 182 million people and a growing healthy middle class. The economy has the largest market in Africa and as a result, is attractive for investment.  The country is abundantly endowed with an array of natural resources which are imperative for industrial/manufacturing production and can be harnessed through inward-looking and resource-based industrialization.

“The manufacturing sector is the biggest in the whole of the ECOWAS region and controls the export trade in the region.  MAN is made up of ten (10) sectors with over 76 sub-sectors manufacturing variety of products.

“The sector has been active in social regeneration in Nigeria in terms of job creation and poverty reduction as it created over 74,000 jobs in the economy from 2013 to 2015.

“Some of these challenges, like the forex scarcity, are transient in nature and may soon disappear, while some Business Membership Organizations, like MAN, are seriously advocating for the resolution of others, including business financing. The Government has also started to give serious attention to the development of the nation’s infrastructure. With these, the environment would be friendlier for investment.

He noted that in a developing economy such as Nigeria, and even in most economies, Micro, Small and Medium-Scale industries (MSMIs) dominate the economy.

“Moreover, MSMIs are generally accepted as the engine of growth in the industrial development of any nation.  This, therefore, explains why MSMIs are the most dominant type of manufacturing enterprises in Nigeria, constituting over 80 percent of the manufacturing sector. In Asia which presently dominates the world in the production of consumer goods, there is a preponderance of micro- small- and medium-scale industries.”

Young entrepreneurs, I believe, would belong to the micro or small-scale industry because, in most cases, technology in use is less complex and can be handled, manipulated and managed by the entrepreneur: the start-up capital is more affordable, depending on the scale of the project and the infrastructure requirement would be minimal.

He pointed out that for young entrepreneurs who want to venture into manufacturing, it is important to note that competition in the world economy, occasioned by globalization, dictates that every country would guard jealously any technology it has developed from being copied or stolen by other countries.  Similarly, in a globalized economy, every country should concentrate in the production of products where it has a comparative advantage so as to be able to sell the products in the global market at competitive prices. Therefore, given the abundant mineral and natural resources in Nigeria, entrepreneurs should exploit the opportunities the environment offers in order to develop the economy, taking a cue from the emphasis by government on solid minerals, agriculture and manufacturing by going into the processing of these resources.

A lot of opportunities exist in small-scale manufacturing in the following sectors that do not require heavy start-up capital:

“It is clear that entrepreneurship can assist in strengthening the manufacturing sector, with adequate encouragement and providing the necessary environment, as indicated below:

“A country’s innovative performance largely depends on how these actors relate to each other as elements of a collective system of knowledge creation and use as well as the technologies they use. For example, research institutes, academia and industry serve as research producers carrying out R&D activities. Such actors must have strong linkages with each other based on a strong level of trust.”

Obong of Calabar Expresses Confidence in the Board of NIMASA