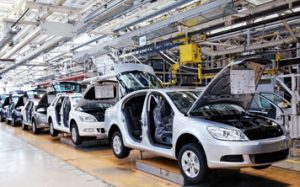 He disclosed this during the unveiling of the stone laying ceremony of the Eastern Vehicles Assembling Limited (EVAL) plant in Egede in Udi local government Area of Enugu state last weekend.

“This is a project we believe will create job opportunities for our teeming youths both directly and indirectly through expected increase in productivity of the feeder steel industry across the country. We know how much this government places emphasis on job creation and gainful employment.”

“30% of the input is coming from local sources and 100% of the body of the EVAL range of vehicles is made of steel. This not only facilitates industrialization through growth of the local steel industry but more importantly helps to reduce the demand pressure on foreign exchange thereby ultimately contributing to enhancing the value of the Naira when the project becomes fully operational. This is why Keystone Bank decided to key in and contribute its own quota to national development and economic emancipation at this crucial period in the country’s socio-economic life”.

The EVAL is financed by keystone bank under the Central Bank of Nigeria (CBN) real sector support fund in partnership with Hawtai motors, China.

Speaking at the occasion, President Muhammadu Buhari stated that the major reasons the Federal Government banned importation of vehicles through land borders was to encourage Nigerians to patronize locally assembled vehicles, create jobs and move the nation’s economy forward.

President Buhari, who was represented by his Senior Special Adviser on Legal and Electoral Matters, Barr. Juliet Ibekaku, also promised to put in place an enabling environment to encourage and protect locally assembled vehicles.

The President said, “I commend the commitment of Eastern Vehicle Assembly Limited to key into the economic development agenda of this administration by building a vehicle manufacturing assembling plant in Nigeria.  The Federal Government is solidly behind this project and will do everything to support you.  We assure you that we will create an enabling environment to protect your investment.”

In his speech, Governor Ifeanyi Ugwuanyi of Enugu State said the establishment of Eastern Vehicle Assembling Limited in the state is part of plans by both Federal and Enugu state governments to drive investments into the country.

Ugwuanyi who was represented by his Commissioner for Commerce and Industry, Barr. Sam Ogbu, said the plant was yet another step to encourage both local and foreign investment in the state.

He commended the Managing Director of EVAL, Mr. Joseph Okechukwu for the courage and will to boost industrial base and provide employment for the people of the state.

Also, Governor Okezie Ikpeazu of Abia State, represented by his deputy, Sir Udeh Oko Chukwu, said his government would ensure the sustainability of EVAL vehicles by using it as its official cars in the State.

Earlier in his speech, the Managing Director of Eastern Vehicle Assembling Limited, Mr. Joseph Okechukwu said the coming of EVAL was in response to the clarion call of the federal government and south- east states to open up investments and woo foreign investors for the industrialization of the country.

“There is nothing you need in a car that is not available in all of our products; you are warned before any accident occurs.

“Eastern Vehicle Assembling Limited will create 1,450 jobs for youths in both Abia and Enugu States, we call on other state governments to borrow this kind of ideals to create jobs for their youths as well as adopt EVAL vehicles as their official cars”, he said.