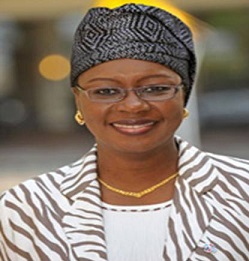 Ecobank Transnational Incorporated (ETI), parent company of the Ecobank Group (www.Ecobank.com), announces the co-option to its Board of Directors of Mrs. Aichatou Agne Pouye.

A native of Senegal, Mrs. Aichatou Agne Pouye is a professional with more than 30 years of experience in the private sector, public administration and international organisations.

She has held leadership positions in many organisations both in private and public sectors where she demonstrated strong skills in areas such as people management, auditing and enterprise management, marketing of banking services, access to finance for SMEs, International Trade Negotiations & TRTA (trade related technical assistance).

Mrs Pouye started her career at Ernst and Young International, Dakar, Senegal in 1984 where she worked as an External auditor. In October 1990, she joined Citibank where she spent 10 years as Resident VicePresident, Group Vice-President and member of the Bank’s Management Committee. In July 2000, she went into public sector career as the General Administrator of the Economic Promotion Fund (FPE), a refinancing fund established by the African Development Bank and the Senegalese Government to fund SMEs and micro projects.

From May 2001 to April 2004, she joined the Government of Senegal as Minister of SMEs and Trade, and thereafter Minister of Trade both mandates covering a cumulated period of five years. In August 2006, she gave an international flavor to her career by taking the position of Director of the Division of Business and International Support and the Division of Marketing of the International Trade Center (ITC), a UN & WTO agency where she worked until December 2017.

She holds a Specialised Postgraduate Degree in Management and Business Administration of the Institut d’ A dministration des Entreprises (IAE) of Caen, France, a BSC and an MSC in Economics, both of the Université de Paris 9 Dauphine (France).

The Caption Photo: The Ecobank Transnational Incorporated Board of Directors of Mrs. Aichatou Agne Pouye.

In Bayelsa: 100 Entrepreneurs Gets N32m As Start-Up Capitals From SPDC