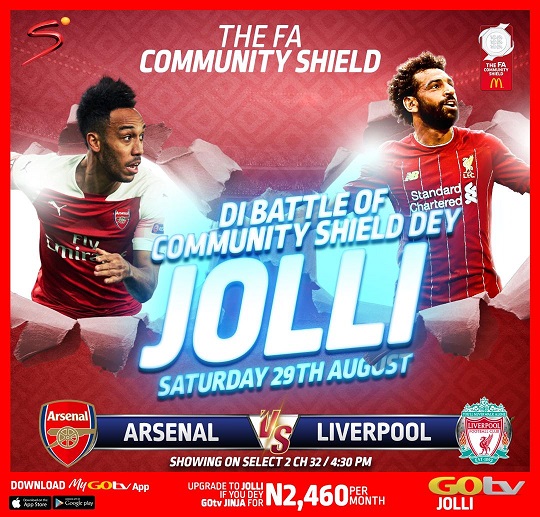 SuperSport viewers on GOtv JOLLI will experience this season’s annual curtain raiser LIVE at 4:30pm on SS Select 2 at no extra cost!

Liverpool and Arsenal are two of the competitions most successful sides with a combined 30 victories between them, so this year’s final comes with bragging right for the victor. This will be a great opportunity for Liverpool manager Jurgen Klopp and Arsenal manager Mikel Arteta who are currently firming up their teams for the new campaign to try-out new formations and give new players the chance to show what they bring to the team in a competitive game.

“In line with our mission to enrich the lives of our customers we felt it important to kick off this new football season with a wider broadcast of the anticipated clash and make it an inclusive experience for our valued customers on GOtv Jolli”, said John Ugbe, Chief Executive Officer, MultiChoice Nigeria.

Customers on lower packages can reconnect or switch to the GOtv Jolli package to enjoy over 65 international and local channels such as FOX, Da Vinci, Zee World, AM Family, TNT, CBS Reality, ROK 2, Big Brother Naija and so much more for only N2,460 per month!

Also, visit www.gotvafrica.com, or download MyGOtv app which is available to iOS and Android users to upgrade or reconnect and for other self-service options and join in on the excitement.

Kindly Share This Story: Three students of the University of Nigeria, Nsukka have emerged National…