The management of the Nigerian Stock Exchange (NSE) at the end of five (5) days this week of trading eneded May 12 disclosed that FBN Holdings Plc, FCMB Group Plc and Zenith International Bank Plc comes top three equities measured by volume accounted for 1.419 billion shares worth N8.185 billion in 5,117 deals, contributing 43.59% and 28.48% to the total equity turnover volume and value respectively. 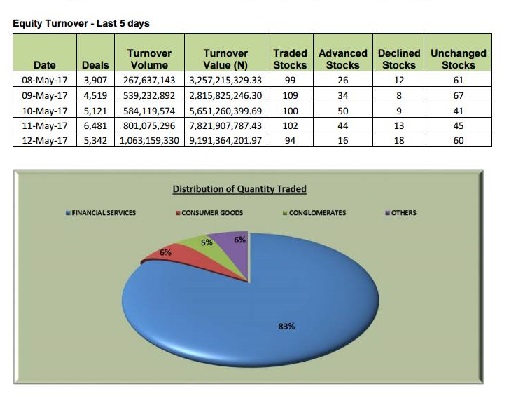 While a total of 5,201 units of Federal Government Bonds valued at N5.400 million were traded this week in 3 deals, compared with a total of 1,582 units valued at N1.608 million transacted last week in 10 deals.

In the same vein; the NSE All-Share Index and Market Capitalization appreciated by 7.46% to close the week at 28,192.46 and N9.746 trillion respectively. Similarly, all other Indices finished higher during the week with the exception the NSE ASeM Index that closed flat.