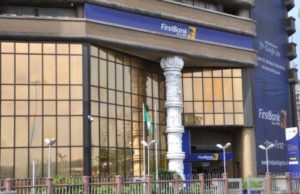 FBN Holdings Plc said it recorded N439.9bn gross earnings, flat year-on-year, from January to September 2019 from N441.5bn in the corresponding period of 2018.

In a statement on its unaudited results for the nine months ended 30 September 2019, it said its net-interest income was N211.4bn in the period under review, down 4.6 per cent y-o-y from September 2018 figure of N221.5bn.

The group said its non-interest income of N98.8bn rose by six per cent y-o-y from N93.2bn in the corresponding period of last year.

Commenting on the results, the Group Managing Director, UK Eke, said, “Our performance in the third quarter reflects the growth trajectory over the first nine months of the year, with significant strides made in transforming the group’s asset quality and diversifying our revenue streams across the board.

“During the third quarter, our NPL declined further to 12.6 per cent as we approach the end of the curve in the resolution of our legacy portfolio and are confident of further reducing this to under 10 per cent by the end of the current financial year.