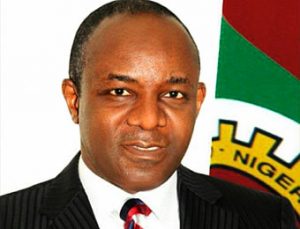 The federal government last Thursday announced its decision to finally opt out of the cash call policy it had adopted, but perennially abused, in funding upstream oil and gas joint venture operations with international oil companies in the country.

Speaking in Abuja during the government signed an agreement to exit the cash call policy with Shell, Total, Chevron, ExxonMobil, Nigeria Agip Oil Company (NAOC) and Oando,  Kachikwu disclosed that the government left the policy with an outstanding debt of $5.1 billion to the IOCs which he said at one time would be paid off over a period of five years through incremental oil production volumes.

The Minister of State for Petroleum Resources, Dr. Ibe Kachikwu, last Thursday disclosed that the Federal Government had finally exited the crude oil Joint Venture (JV) cash-call policy it had with about six major International Oil Companies (IOCs) operating in the country.

Kachikwu assured Nigerians that with the new development, government’s revenue was expected to increase by $2 billion annually, while Nigeria’s oil production would increase to 2.5 million barrels per day (mbpd) by 2019.

Cash calls are requests for payment for anticipated future capital and operating expenditures, sent by joint venture operators to non-operating partners, in this case, the IOCs to the federal government, he noted.

“Most joint operating agreements (JOAs) include a provision that allows the operator to issue cash calls to non-operating partners. The government has from accounts, failed to consistently meet its cash call obligations to the JOAs.”

According to Kachikwu, the development would also result to the reduction in unit technical production costs of oil from $27.96 barrels to $18 in the country.

He noted that this also gave the Nigerian National Petroleum Corporation (NNPC) and its joint venture partners the opportunity to grow outside of the previous constraints of government’s failure to meet up with its obligation to the funding of oil and gas operations.

“What was happening before was, money is made, it is taken to the federal purse, the NNPC will now beg the Federation to pay operators back their operations funds, which is not done most times.

“What we are saying now is that as the operators produce, the NNPC Joint Venture partner approves cost and deduction is made immediately. That is how business is run. A business is not run after income is generated without the costs component and hoping to find the cost outside of the business,” said Kachikwu.

He further explained that, “The second component is that we are now making sure that governance process is embedded and the third is that the NNPC is now given the full independence and ability to go out and raise finances even outside to do the projects they are willing to do and they have the assets to do that.”

In his explanations of how the exit from cash call will usher in a self-financing regime for the NNPC and its JV partners, Kachikwu said: “We are letting the operators to be able to capture their cost, deduct that, prior to getting to the next income position, back into the Federation Account.”

He said the exit now gives the NNPC and the IOCs the room to grow as big as they would want to without the constraints of federal government’s controls or budgetary challenges, and that the governance issues that had been put into the new policy would reduce substantially the amount of time it takes to implement contracts in the industry.

Kachikwu also stated that the first point of call is for the IOCs to be able to deduct their cost as opposed to the old system where money was made, taken to the federal purse and they beg the government to pay them, which in most cases government never did.

He equally added that the implementation of the cash call policy had delayed production, weakened efficiency and degenerated confidence in the industry, but the new regime would bring clarity and stability to the management of the country’s oil and gas resources.

On the outstanding debt to IOCs, he said: “The reality is that the number that I have from NNPC was about $6.8 billion over the last three, four years. We managed to get a head cut out of it which is like a discount from the oil companies of about $1.7billion. And then we have $5.1 billion in the next five years.”

Also, the Ministry of Petroleum Resources stated that the new cash call policy is part of a new measures and strategies aimed at securing future funding for the upstream petroleum sector.

These strategies, the ministry stated, were fully supported by the National Economic Council (NEC).

It said: “The net payments to the Federation Account are expected to double from about $7 billion to over $14 billion by 2020 and the immediate effect of the new cash call policy will increase net FGN Revenue per annum by about $2 billion.”

Also speaking at the event, the Group Managing Director of the NNPC, Dr. Maikanti Baru, toed the line of minister that the JV cash call exit arrangement would chiefly excuse the government of the financial burden involved in funding JV operations.

Baru said it will address the longstanding issues of unpaid cash call arrears, underfunding of the joint venture and the burden of monthly cash call payments by the Federal Government.

“Under the new funding model and governance process, the government of Nigeria would continue to receive royalties, taxes and profit from its equity share of JV oil and gas production as the cost of operation would be deducted upfront.”