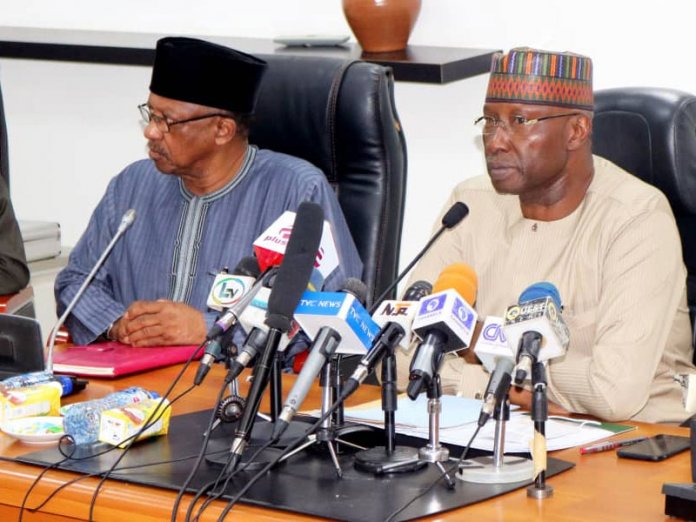 The federal government has extended the guidelines on phase three of the eased lockdown by one month with effect from today.

The Secretary to the Government of the Federation, Mr. Boss Mustapha, announced this yesterday at the Presidential Task Force (PTF) on COVID-19 briefing in Abuja.

Mustapha, who chairs the task force, said cases of B117 strain of COVID-19 have been recorded in Nigeria.
The strain was first reported in the United Kingdom and South Africa.

The PTF also put the cost of each dose of the vaccines at between $3 and $10.
Mustapha said the decision to extend all extant measures that were prescribed in the guidelines in phase three of the ease on lockdown were premised on the fact that the country has continued to see an increase in COVID-19 cases.

Also, bars, night clubs, pubs and event centres and recreational venues are to be closed for the period as they are considered super spreader places for the virus.
The extension also affected restrictions on weddings, conferences, congresses, office parties, concerts, seminars, sporting activities.

They must have in attendance not more than 50 persons, while mosques and churches should not be filled beyond 50 per cent of their installed capacity.
He stated that efforts to access and deploy vaccines are progressing as COVAX is due to deliver the initial 100,000 doses next month.

Mustapha added that the B117 variant first reported in the UK has been found in three persons travelling out of the country and in one resident.

He said local virologists had been sequencing the variants of the virus.
According to him, the federal government is currently working with Saudi Arabia on the deportation of 600 Nigerians.
He said the deportees will arrive in two batches on January 28 and 29.

Executive Director of the National Primary Healthcare Development Agency (NPHCDA), Dr. Faisal Shuaib, said the Pfizer/BioNTech mRNA vaccines will cost about $10 per dose while the Oxford/AstraZeneca will cost $3 per dose.

“Let me reiterate the fact that at the National Strategic Cold Store (NSCS), we have three Ultra-Cold Chain (UCC) freezers, which have the capacity to store over 400,000 doses of Pfizer/BioNTech mRNA vaccines at a temperature of -60 to -80 degrees centigrade.

“We also have walk-in freezer rooms that can store vaccines at -25 to -15 degree centigrade,” he said.
He explained that the variations in the storage requirements of the vaccines, saying that mRNA vaccines can be stored at two to eight degrees centigrade at the health facility level for five days.