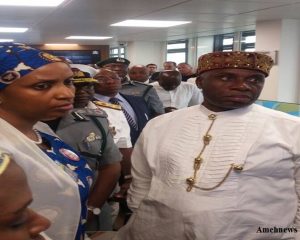 The Minister of Transportation, Rotimi Amaechi (Right) and the NPA Managing Director, Hadeza Usman listen with rapt attention as the CCCIS was being demonstrated for his on the spot admiration.

The Minister of Transportation, Rotimi Amaechi who did the commissioning of the Command, Control, Communication and Intelligence System (CCCIS) was particularly happy because of it’s positive security implications, even as the Nigerian Ports Authority (NPA) owners of the device was in celebration, because the equipment would assist in a remarkable boost of its revenue. 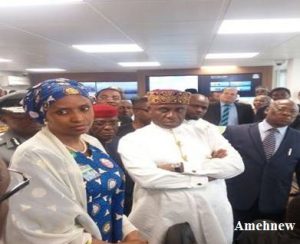 The Minister who confirmed that with the installation, Maritime activities within and beyond the six Nigerian Ports of Lagos, Port Harcourt, Calabar, Onne, Warri can now be meticulously monitored, simultaneously in Lagos also described the achievement as a “remarkable milestone” in the development of the nation’s Port operational system.

“It is pertinent to note that the development of this facility began with an approval in 2013 with the aim of providing Business Intelligence for the movement of vessels and Cargoes, as well as providing improved and secured communications within our waterways ;for enhancement of efficiency within the nation’s seaports”, revealed Rotimi Amaechi, highlighting that the infrastructure comprises of “long and short range video surveillance monitoring systems, as well as several other software applications which are in line with the International Maritime Organisation (IMO) Convention for the Safety of Life at Sea (SOLAS) and the Ships and Ports Security (ISPS) Code. 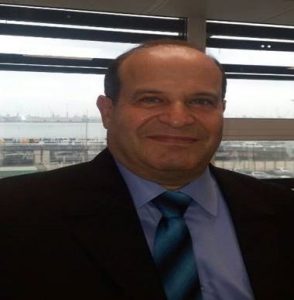 The Minister assured the International community that Nigeria as an IMO member, will remain committed to upholding the thrust of the organization, in the areas of safety, security, environmental protection and trade facilitation; stressing that he was not in doubt that the “conceptualization, development and installation of the CCCIS by the NPA will in no small way promote the ratings of our ports, by the IMO.

Speaking in the same vein, the NPA Managing Director, Hadeza Usman indicated her joy, stressing that by virtue of the equipment the NPA as a worthy stakeholder, would now be capable of assisting the country in networking to surmount security and Safety challenges, not within Nigeria, but within the entire Gulf of Guinea, alongside the capability of an interface with other relevant stakeholders, to track as well as record Maritime Security breaches.

“This technology will enable the Nigerian Ports Authority, not just to generate adequate revenue, but also to ensure that all revenue leakages are blocked, in furtherance of the Federal Government efforts towards revitalising our economy.

“Let me reiterate that in the days ahead, the Nigerian Ports Authority will be playing pro-active roles in the digital space, ensuring that there is synergy and collaboration amongst relevant agencies such as Navy, NIMASA, Customs and other security and intelligence agencies, for the purpose of sharing information, documentation to enhance Maritime Safety, security, as well as block revenue leakages.

“It is pertinent to note that this project comprises of the Marine Operational Centre (MOC), which will enable the actual monitoring of vessels ; the Network Operations Centre (NOC) which is the support; and infrastructure data base, that stores all information, including recorded videos”, she stated further, concluding on the note that the present commissioning covering Maritime activities in the six ports and four pilotage districts should be seen as a running project, representing a journey, and not a destination, as it will incorporate other Port automotive devices, like the Vessel Traffic System (VTS) pursuant to the IMO prescription on SOLAS and the Integrated Port Community Information System (IPCIS), with the ultimate goal of establishing an automated Single Window System.

Over time, the customs brokers have been victims of substandard importation by importers who, in…