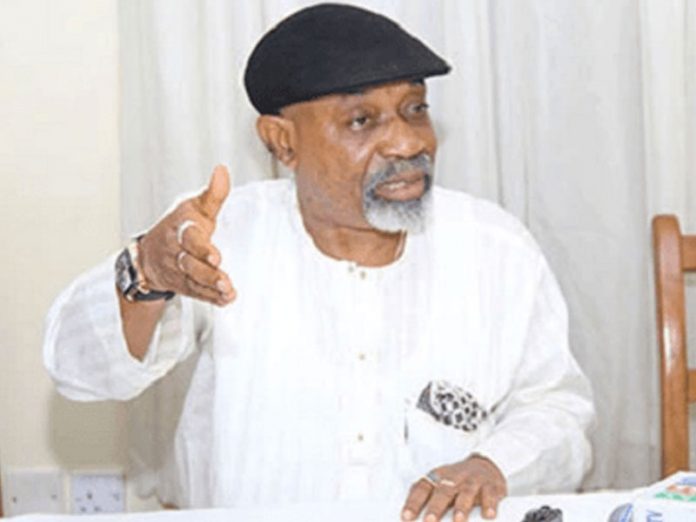 Minister of Labour and Employment, Dr. Chris Ngige, has indicated the federal government’s intention to drag the Academic Staff Union of Universities (ASUU) before the National Arbitration Panel and even the National Industrial Court (NIC) if the union fails to respond to invitation for negotiations.

He urged the striking lecturers to take the opportunity of a recent invitation by the federal government to return to the roundtable.

The minister said he had invited the leadership of the union for a zoom meeting, but they insisted on meeting him face-to-face.

“I invited ASUU for a zoom meeting in compliance with World Health Organisation (WHO) and Nigeria Centre for Disease Control (NCDC) COVID-19 guidelines, but they insisted on meeting me face-to-face. We have labour laws,” he said.

But ASUU said negotiations via zoom would not produce the desired solution to the lingering dispute.

The union added that for it to suspend the strike, the federal government must make substantial progress in addressing its key demands, which include payment of arrears of earned allowances, revitalisation fund and constituting visitation panels for federal universities.

However, Ngige warned that if the union refuses to come for talks, the federal government might invoke the labour laws to compel its response.

He said: “The law permits the federal government to take the union to the National Arbitration Panel and even the National Industrial Court.”

According to a statement by his media aide, Mr. Emmanuel Nzomiwu, the minister spoke in his hometown, Alor, Anambra State, where he donated palliatives worth N15 million to vulnerable households to cushion the effects of COVID-19 pandemic on them.

He said the ASUU strike was all about the Integrated Payroll and Personnel Information System (IPPIS), adding that “any other reason given by ASUU is an excuse.”

Ngige accused the leadership of the union of deceiving the members and not telling them the truth.

The minister described the position of ASUU in the dispute with the federal government as laughable, saying “as an employee, you lack the right to dictate for your employers how to receive wages.”

“It is even in the International Labour Organisation (ILO) convention on wages. You cannot dictate for your employers how to pay you. But the important thing is for your salaries and wages to come to you. As a workman, you receive your payment as compensation for services rendered. So, that is on the statute everywhere. But for some strange reasons, this has been an issue with the Academic Staff Union of Universities. Why? They claimed that they are being migrated from the GFMIS (Government Integrated Financial Management Information (GFMIS) platform to the IPPIS),” he stated.

Ngige said the federal government had complained that it was losing a lot of money paying lecturers from the GFMIS platform, which only transmits money for their salaries to the university system through the bursar’s office, from where they are paid.

“The anomalies are that one, some of the people are ghost workers. They don’t exist at all but their names exist and they are drawing money from the federal government.

The minister said over time, the shortfalls in tax deduction accumulated to over N800 billion and JTB (Joint Tax Board) penalised the federal government for these monies not paid to the states.

He added that the federal government from the office of Accountant General of the Federation paid over N800 billion to states.

According to him, the uncompromising attitude of ASUU in the dispute is worrisome to the federal government.

He said not minding that the strike, which commenced on March 9 did not follow due process, he brought the lecturers to a roundtable with the Federal Ministry of Education and the Accountant General of the Federation.

“We had discussions and they now said that some of the agreements we had in Memorandum of Action 2019, were not implemented vigorously and we agreed that they will be paid N25 billion for their earned academic allowances and another N25 billion for revitalisation of university system.

“The federal government had to pay retroactively with effect from when the president signed the National Minimum Wage Act. So, the federal government could not pay ASUU the next tranche of N25 billion because it was due to be paid in October last year. They said there was a breach.

“We said we are owing and that we can pay for it. So, we restructured it and agreed that the government can pay them N20 billion and another N20 billion for earned academic allowances between April 2020 and May. We all agreed,” Ngige said.

The minister said the federal government even agreed to test the University Transparency and Accountability Solution (UTAS) system proposed by ASUU to encourage Presidential Order 5 on local production, but the union asked for 18 months to enable its researchers to conclude work on it.

He said the government recommended that ASUU should migrate to the IPPIS while waiting for their researchers to conclude work on UNTAS and bring it for integrity test for all parties to agree, but the union rejected the proposal.

FG May Allow States To Decide on Reopening of Schools, Businesses