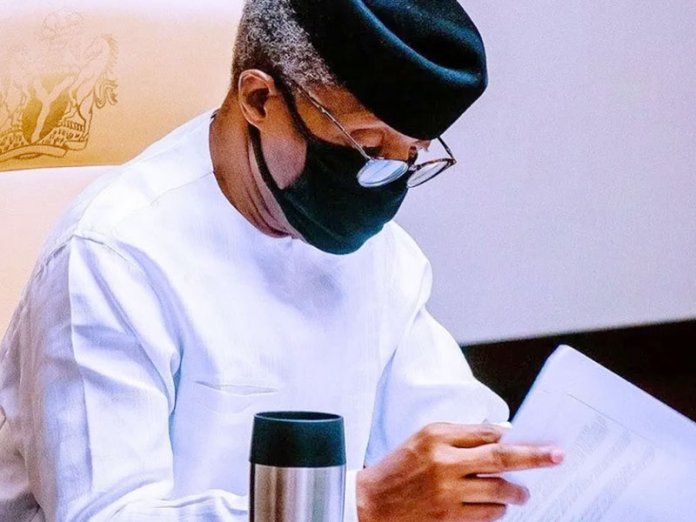 Vice President Yemi Osinbajo yesterday disclosed that the implementation of the Micro, Small and Medium Enterprises (MSMEs) Survival Fund as part of the Economic Survival Fund was to cushion the impact of COVID-19 on the economy.

He stated this at the virtual inauguration of the Fashion Cluster Shared Facility for MSMEs, the Eko Fashion Hub 1, in Lagos State.
A statement by the Senior Special Assistant to the Vice President on Media and Publicity, Mr. Laolu Akande, restated the commitment of the federal government to creating a more business-friendly environment for MSMEs in Nigeria.

The Vice President explained that under the Survival Fund was a Payroll Support Scheme, which would provide up to N50,000 in monthly salaries for up to 10 staff of a qualifying business, for a period of three months.

Quoting the Vice President, the statement said, “There is also a N50,000 grant for 100,000 small and medium-scale businesses, while 333,000 self-employed persons working as artisans and transporters will benefit from a one-off grant of N30,000.

“The President has also approved that the federal government bear the full cost of business name registration for 250,000 new businesses nationwide. “We are doing all these to support MSMEs across the country to maintain their staffing levels and keep their businesses afloat through these very challenging times.”

The Vice President said the Buhari administration’s commitment to the success of small businesses is evident in its MSMEs Clinics initiative, which extends business support services to small businesses across the country, of which the MSMEs Shared Facility Scheme was a core component.

The Eko facility, which was developed through a collaboration between the federal government, the Lagos State Government, and the Organised Private Sector, is an end-to-end fashion production centre equipped with needed machinery and will be made available to the public under a shared facility style structure.

He added that the MSMEs’ Shared Facility Scheme being implemented by the Buhari Administration under the National MSMEs Clinics “seeks to provide high-quality operating equipment which small businesses can access at a reasonable cost, within a conducive space.”

The VP added that, “the Eko MSME Fashion Hub 1 being commissioned today (which is strategically located by the old Alade Market, just off the Allen Avenue Roundabout, one of the leading commercial hubs on the continent) is equipped with first-rate machines and equipment. I am told it will service 380 MSMEs daily, and 136,800 yearly.”

The VP noted that, “the choice of Alade Market and the general Allen Avenue area was a unanimous one arising from extensive consultations between the federal government’s MSME Clinics project, the Lagos State Government and the fashion cluster in Lagos.

“With the launch of the Eko MSME Fashion Hub 1, MSMEs in and around Ikeja will no longer have to travel far to use equipment that is expensive for individual businesses to procure by themselves such as those for making button-holes or monogramming.

“With its full-scale production line, this Hub will enable production of a diverse range of clothing and garments: wedding dresses, military uniforms, office wear, and similar products. Very soon, the products of the Hub will be ubiquitous on the streets and in stores around the country. The fashion industry will be one of Nigeria’s biggest sources of revenues, it will be bigger than oil.”

It would be recalled that in June this year, the Vice President had virtually inaugurated and handed over the 200,000-capacity Yam Storage Facility at the Zaki Biam International Yam Market in Benue State.

The VP stated that there were also plans to establish similar facilities in other parts of the country, including in Kaduna, Anambra and the FCT.

Prof. Osinbajo added that the Buhari administration was also supporting small businesses by improving access to credit through the Central Bank, Development Bank of Nigeria, Bank of Industry, and others; and lessening the tax burdens, through initiatives like the Finance Act, “which has exempted businesses generating less than N25 million in annual turnover from Companies Income Tax. Those with a turnover of between N25m and N100m will only pay 20% corporate income tax instead of the normal rate of 30%.”

The Lagos State Governor, Babajide Sanwo-Olu, who was physically present at the event in Ikeja, commended the President and Vice President for supporting the scheme, and stated that there would be plans to replicate the same in other parts of the state.

Virtually present at the inauguration was the Minister of Works and Housing, Babatunde Fashola; Minister of State for Industry, Trade and Investment, Mariam Katagum; CEO and Group Managing Director, Access Bank, Herbert Wigwe; and the Special Assistant to the President on MSMEs, in the Office of the Vice President, Tola Johnson.

Other government officials on ground at the commissioning include the State Commissioner for Commerce, Industry and Cooperatives, Dr. Lola Akande, among others.

Nigeria Will Mobilise NYSC Members for Implementation of SDGs -Buhari