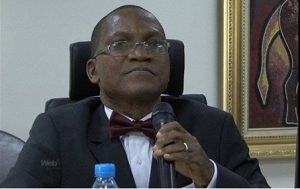 The Debt Management Office (DMO) on Wednesday listed series 1 of the Federal Government of Nigeria (FGN) Savings Bond worth N2.067 billion at N1,000 on the trading floor of the Nigerian Stock Exchange (NSE).

Dr Abraham Nwankwo, DMO Director-General, disclosed in Lagos that the bond would help to finance the nation’s budget deficit, therefore the listing became imperative to guarantee liquidity of the bond. he added

According to Nwankwo statement, “the savings bond, the first of its kind in Nigeria was opened to the investing public by way of offer for subscription over a five-day offer period.

In his word: the bond with subscription units of 2,577 will be issued monthly in tenors of two and three years, with quarterly payment of interest to investors.

DMO Boss pointed out that the response to the bond had been huge as individuals made enquiries with interest to participate in the bond.

He noted that the bond will provide retail investors and ordinary Nigerians the opportunity to partake in infrastructural development of the country as well as generate good returns on their investments.

“Over a year ago, the NSE mentioned the possibility of introducing retail bonds and we started working on it, with the team on NSE with the CBN, Securities and Exchange Commission and with other agencies that are relevant.

“The FGN bond is meant for every Nigerian both at the grassroots as well as the common man.

“The objectives of the bond had been achieved from the beginning as about 95 per cent of the subscriptions were from average individual Nigerians.

He said that the success showed that the initiative taken by the financial system and the NSE and other players in the market including stock broking community, had yielded fruits in terms of financial inclusiveness.

The director-general commended all the stakeholders for the successful issuance of the first FGN Savings bond and urged Nigerians to be optimistic on the future of the nation’s economy.

Also speaking, Haruna Jalo-Waziri, NSE Executive Director, Capital Markets, said that the exchange was delighted with the savings bond listing which would mature in March 2019.

Jalo-Waziri was of the the opinion that the bond among others would help to enhance the savings culture among Nigerians, while providing all citizens irrespective of income level an opportunity to contribute to national development.

He stated that the FGN Savings Bond is safe and backed by the full faith and credit of the Federal Government of Nigeria, with quarterly coupon payments to bondholders.

NSE ED, urges an interested investor needs to approach any of the accredited brokers and require only the sum of N5, 000 to subscribe with additions in multiple of N1, 000 subject to a maximum amount of N50 million.

“We are pleased to list the series 1 of this innovative investment offering that caters to the retail segment of the Nigerian Capital Market.

“The off take of the first tranche underpins the efforts of the Federal Government to continue to work with stakeholders to deepen the capital market while delivering value to investors at all income levels.

Jalo-Waziri who solicited for more of listing said “We look forward to continue the collaboration with DMO to list subsequent series of the Savings Bond.”