The Fidelity Bank Plc’s loyal customers across the country have received their cash and consolation prizes during the second bi-monthly draw of the Get Alert in Millions (GAIM) promo season 4. 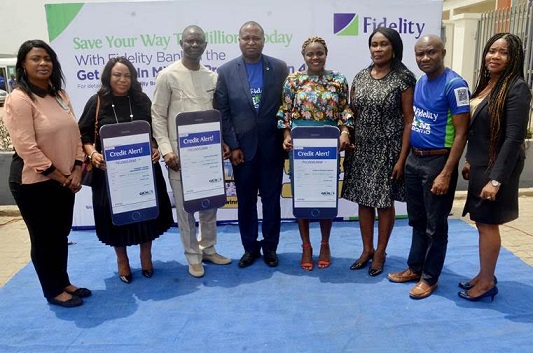 This statement was made when the three customers of the bank emerged as winner on Monday, at the second Bi-Monthly/4th Monthly and Prize Presentation of the GAIM.

The Managing Director, Fidelity Bank Mr. Nnamdi Okonkwo, said the bank has consistently kept to its words by rewarding customers. A total of N68 million in cash prizes as well as other consolations prizes have been won so far, he added.

The event was held on Monday, at the second Bi-Monthly/4th Monthly Prize Presentation of the GAIM at premise of bank branch at Oshodi in Lagos.

Okonkwo who was ably represented at the event by Mr. Richard Madiebo, the bank’s Divisional Head, Retail Banking said this “GAIM is part of the series of our promo which has held over the last 13 years and this is the ninth promo that we have held.

Both cash and consolation prizes was presented in the presence of their family members, the media, officials of National Lottery Regulatory Commission, Consumer Protection Council, Lagos State Lotteries Board, among others.

The managing director expressed delight at having more winners while assuring that Fidelity Bank would continue to keep its promise of rewarding and improving the living standard of its customers.

“This promo is meant to improve the standard of living of our customers and also drive the financial inclusion narrative of the federal government.

“With this, we have been able to avail prizes in cash and consolation prizes.

“We have done about N68 million in cash prices so far and we have N52 million to go. So, what we are telling customers is that this is the time to save money.

“You are always a winner when you save, it is either you are winning in the area of cash prices or consolation gifts or even in the good service that you are given in any of our branches.”

He added: “We have been able to tell customers, not only in the prices we have given, but in the various activities we have also instituted, that the savings culture is here to stay.

“The fact that the federal government is very interested in the financial inclusion narrative, it is also very important to us in Fidelity Bank. In addition, this is to reach out to customers through financial inclusion strategies, agent banking and using digital channels to further drive that narrative among the various sectors of the economy.”

In response to how to qualify for the draw, the Fidelity Bank Branch Manager, Oshodi, Mr. Abisayo Raji, said both existing and new customers should simply top up their account with N10,000.00 for existing customers or someone opening a new account and building it up to N20,000.00

“Increase your chances of winning millions with every N20000 in your Fidelity Bank Savings Account or visit any Fidelity Bank or better still Log in to www.gaim.fidelitybank.ng and start saving today.