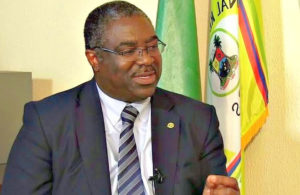 The amount is 77.89 billion above the N3.941 trillion collected between January-September 2018.

Though the amount collected represents 60.77  per cent of the N8. 8 trillion target of the FIRS for 2019, Fowler is optimistic that FIRS will do better than the N5.3 trillion it collected last year.

At the 2020 National Budget hearing before the Senate Committee on Finance, Comptroller General Customs, Rtd. Col. Hameed Ali said the closure of Nigerian borders to a deluge of imports is not solely about revenue.

Fowler on the other hand challenged Senators to have the courage to pass legislations that will send tax evaders to jail. If they do, he said, the over 40,000 taxpayers who have between N100 million and N 1billion as turnover in their accounts, who are not paying taxes will quickly pay their taxes. “Just a little over 3000 of the taxpayers who have lien on their accounts have paid N102 billion. In Nigeria, if you have the courage to pass laws that will send tax defaulters to jail, the 40,000 tax defaulters will pay.

“In terms of whether revenues cannot be generated by enforcement, we have gone over various programmes to bring people into the tax net. Before this in 2016, there was a tax amnesty in which 5000 companies came through and they also paid N92 billion within 45 days. VAIDS was also N90 billion. And it took one year. The question I’d like to ask you is, can N90bn make a difference in a developed or even a developing country? It will make a lot of difference. These are businesses or individuals that have income but had refused to pay taxes. Currently, we have close to 40, 000 of those accounts under lien for which they have not paid any taxes

“And I believe that this is a crime the society and I think that we are at that point now where we have no choice than to enforce payment. I did highlight earlier that 3000 of those accounts paid N102billion. I think that we have reached that stage where the society in general should not condone those among us who have the opportunity and privilege to have a job or to earn profits and also accept them not to pay taxes to contribute to the society.
Fowler contended that it is not true that Nigeria has not given or is not giving incentives to small businesses.

“I will first start with incentives. It was true that the past government, the government before this one did give a lot of incentives. And if you look at history of business and incentives regardless of which country you are in, businesses do no grow because of incentives, they grow because they believe that they can make profits and of course, they want certainty. But in terms of incentives for the small scale businesses with turnovers of N25 million and bellow, within the Finance Bill that has also been submitted for approval, there is recommendation to reduce the Companies Income Tax (CIT) rate from 30 percent to 20 percent.

Sounding emotive on how taxes, however little could make an impact in the live of Nigerians, Fowler told the committee led by Senator Barau Jubril Mailiya: “But with this in mind, I would like to bring this to the House. I did find out, some years back that Nigeria has the highest rate of infant mortality and that was due to malaria. And in discussing with the hospitals, it was clear that with N2, 500, a child’s life could be saved. So, even for the small-scale businesses that make profits, even if they go to pay taxes, even if it is the minimal tax, everyone who earns an income should pay tax irrespective of how small it is with the consideration a sum as small of N2, 500 could save a life.

“In terms of production, Yes. Production activities creates employment. Employment creates more tax revenue. For you to be in a state of production, you need infrastructure.

“In terms of my target not being met, I did mention that my 2019 target is a 32 percent increase over my 2018 target. In terms of total collection, we are currently ahead of 2018 target by 13 percent which translates to N71 billion. We believe that the non-oil sector will continue to improve. We are currently at 72 percent in the non-oil sector. The bulk of the revenue of the FIRS comes from the middle of the year, from July to December. We are still hopeful that if the non-oil sector continues to improve, we achieve 80 percent of the target. That should be sufficient.
The main area we are having challenges is the oil-sector which is performing under 50 percent. And that is simply because the level of production is low in relation to budget and the oil price is equally low. but I think that what we should consider is that when you set a target, it should be challenging. I believe that if we can achieve 80 to 85 percent of that target, it is well met.
On collection, Fowler told the Senators that so far FIRS has collected a total sum of ₦4.012 trillion for January to September, 2019 which is 61% of total target for the period as against ₦3.941 trillion collection for the corresponding period in 2018.  This translates to an increase of ₦71 billion. Full year tax revenue collection in 2018 was ₦5.320 trillion which represents 78.86% collection performance to target for the period.

“We are pleased to report that our drive towards developing more sustainable sources of tax revenue by shifting the focus from oil revenue to non-oil is also yielding positive results. Non-oil revenue collection for January to September, 2019 stands at ₦2.423 trillion representing 72% achievement of non-oil target for the period while Oil revenue collection of ₦1.588 trillion represents 49% achievement to target for the period. The total collection contribution in 2019 shows a percentage ratio of 61% for Non-oil revenue to 39% for Oil revenue, while Non-Oil collection for January to September, 2019 grew by 13% over the Non-oil collection for the corresponding period in 2018.

“Please note that the noticeably low inflow of revenue from PPT for 2019 thus far, is as a result of shortfall in PPT estimates filed by the International Oil Companies (IOC). This is resultant from huge losses carried forward and tax incentives arising from the Modified Carried Agreements (MCA) by Joint Venture (JV) partners, unutilized Investment Tax Credits carried forward by the Production Sharing Contract (PSC) contractors which subsequently reduced the profits available for Petroleum Profit Tax (PPT). This is further compounded by production constraints which has continued to fall below the projected figure of 2.3 million bpd for the year.

“The target for FIRS as provided in the MTEF which is before the National Assembly is ₦8.5 trillion.

The FIRS Chairman listed the strategies being implemented towards attaining the N8.8 Trillion target as follows: ICT Initiatives, Compliance and Enforcement Initiatives, International Tax Initiatives, Tax Amnesty Programme and Expansion of taxpayer database and other Initiatives