In the wake of a highly anticipated moment in the Nigerian financial market, FMDQ Holdings PLC (FMDQ or FMDQ Group) unveiled the winners of its 2020 GOLD Awards. The FMDQ GOLD Awards (GOLD Awards), 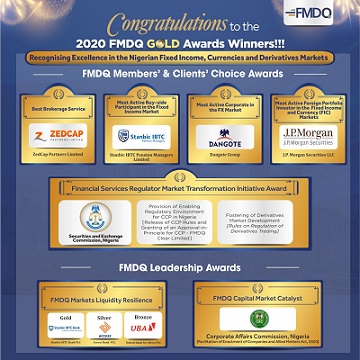 underscored by the tenets FMDQ’s GOLD (Global Competitiveness, Operational Excellence, Liquidity and Diversity) Agenda,  has become a corporate tradition of FMDQ, recognising the demonstrated resilience and agility of the Nigerian financial market participants, and acknowledging the valuable efforts of these stakeholders whose participation in the FMDQ markets (Fixed Income, Foreign Exchange, and Derivatives), and across the financial market infrastructure (FMI) value chain of FMDQ’s business – Exchange, Central Counterparty, Depository and Private Markets – between the review period of October 2019 to September 2020, have positively shaped the course of the markets and invariably impacted development of the Nigerian economy.  Now in its third year, the 2020 FMDQ GOLD Awards, fast becoming a beacon of recognition for the Nigerian financial market, has attracted the attention of local and international stakeholders, with Awards across the Primary Market, Secondary Market, FMDQ Members’ & Clients’ Choice (as nominated and voted by FMDQ Members/Clients) and FMDQ Leadership segments.

Despite an exceptionally tough year in 2020, owing to the outbreak of the novel coronavirus (COVID-19) pandemic that affected the global economies and financial markets, as well as the recent social unrest in the country, the Nigerian financial market participants continued to play an all-important role in stabilising the economy at large, providing a viable avenue for governments, corporates, and individuals to efficiently raise capital, transfer value and manage their risks, and remaining relentless in their quest to make the Nigerian financial market GOLD. In the light of the standards of the “new normal”, and in keeping with the tradition of FMDQ Group to recognise excellence in its markets, the 2020 FMDQ GOLD Awards was commemorated, albeit without a ceremony, as the list of Awards winners was circulated to the public via publications across all traditional and online media channels on Friday, November 6, 2020.

Acknowledging the finalists and nominees, and congratulating the 2020 FMDQ GOLD Awards Winners, the Group Chairman of FMDQ Group, Dr. Kingsley Obiora, via a virtual address, noted that the year 2020 has been a truly challenging yet rewarding year; one which has stretched the resilience of the market and at the same time availed opportunities to deepen our markets. According to him, FMDQ Group commenced the year with great optimism as it became a Capital Market Holding Company, and Africa’s first vertically integrated financial market infrastructure group, with four (4) market subsidiaries, and despite the economic downturns which the global and local economies face, the Group remains committed to the actualisation of its GOLD Agenda. Also commending the winners and all the stakeholders in the Nigerian capital market for their efforts at making Nigeria globally competitive, the Director-General of the Securities and Exchange Commission (SEC), Mr. Lamido Yuguda, who was represented by the Executive Commissioner, Operations, SEC, Mr. Temidayo Obisan, reiterated the commitment of the SEC towards collaborating with the financial market stakeholders, including the financial market infrastructures, to define appropriate market structures, create an enabling environment, build a transparent and efficient market and ultimately reduce systemic risks and protect investor interests. 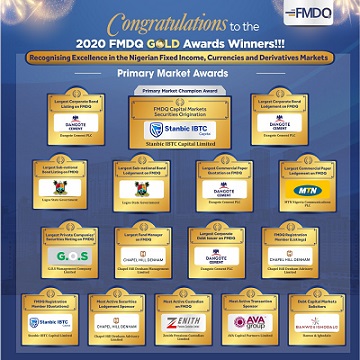 Expressing her delight at the innovative strides of the FMIs, including FMDQ, and other market participants, Ms. Arunma Oteh, OON, Academic Scholar at Oxford University, United Kingdom & Former Treasurer/Vice President at the World Bank, also via a virtual address, congratulated the winners, nominees, finalists and other stakeholders within the wider ecosystem, for their immeasurable contributions towards making the Nigerian financial market truly GOLD. Delivering his virtual address to the market on the 2020 GOLD Awards, Mr. Bola Onadele. Koko, Chief Executive Officer, FMDQ Group, noted the uniqueness of this year’s commemoration, highlighting the challenges posed to the market by the COVID-19 pandemic, and lauding the efforts of the participants at maintaining the integrity and resilience of the market. Whilst expressing his appreciation for their contributions and collaborative efforts towards making the Nigerian markets GOLD, he noted that FMDQ, as a critically important financial market infrastructure in Nigeria, recognises that an efficient financial market is the collective effort of all stakeholders. He added that, through the actualisation of its GOLD Agenda – which presents opportunities for reforms with far reaching implications for the transformation and development of the Nigerian financial markets – FMDQ shall continue to work with all stakeholders to facilitate the delivery of prosperity to Nigeria and Nigerians, and urged all stakeholders to look forward to the fourth FMDQ GOLD Awards slated for November 5, 2021.

As announced via circulation across all traditional and online media channels, 2020 GOLD Awards saw thirty-one (31) Award categories and thirty-four (34) Award winners, with joint winners in two (2) categories.  Winning for the third time in a row, Stanbic IBTC Capital Limited bagged the award for the Primary Markets Champion – Capital Markets Securities Origination Award; and  Stanbic IBTC Bank PLC, also for the third time, emerged the Secondary Markets Champion, winning the FMDQ Dealing Member Award, amongst six (6) other Awards amongst the Stanbic IBTC entities; Dangote Group won four (4) awards, with three (3) of these bagged by Dangote Cement PLC, including the Largest Corporate Bond and the Largest Commercial Paper Awards. Further, Chapel Hill Denham, won three (3) Awards, including the FMDQ Registration Member (Listings) and the Most Active Securities Lodgement Sponsor Awards. The Securities and Exchange Commission (SEC) bagged the Financial Market Regulator Market Transformation Initiative Award for the provision of enabling regulatory environment for Central Counterparty (CCP) in Nigeria through the release of CCP Rules and granting of an Approval-in-Principle for CCP – FMDQ Clear Limited as well as for fostering of derivatives market development via the release of the Rules on Regulation of Derivatives Trading, as voted by FMDQ Members and Clients. Three (3) FMDQ Dealing Member (Banks) – Stanbic IBTC Bank PLC, Access Bank PLC and United Bank for Africa PLC – were also awarded gold, silver and bronze respectively, for a new Award category – FMDQ Markets Liquidity Resilience Award – for significantly contributing to sustained liquidity and market activity, despite the slowdown in the domestic and global economies, following the outbreak of the COVID-19 pandemic. The Corporate Affairs Commission (CAC) was also recognised with the FMDQ Capital Market Catalyst Award, for the facilitation of enactment of the Companies and Allied Matters Act, 2020, which has the potential to significantly impact the Nigerian capital markets. 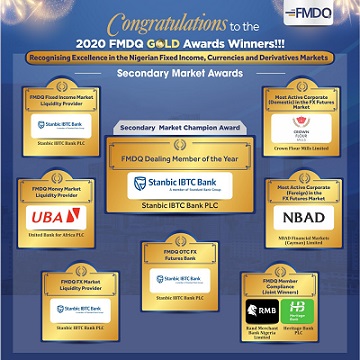 Telecommunications industry contribution to Gross Domestic Product grow by 3.42 percent to 14.30% in Q2, 2020