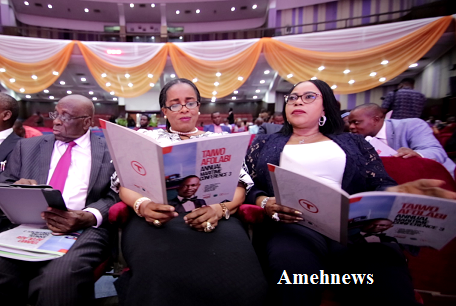 Folarin who summarized but details of Nigeria Ports Reform process before the stakeholders and academia during the 3rd Annual Maritime Conference 2018, organized by Maritime Forum, Faculty of Law, University of Lagos at the third edition of the Taiwo Afolabi Annual Maritime Conference in honour of the Chief Executive and Vice Chairman of the Sifax Group, Dr Taiwo Afolabi held at the Main Auditorium, University of Lagos on Friday.

Speaking on the Conference theme which was: “Port Costs and Ports Charges: A Recurring Decimal under Port Reform Regime”, Otunba Folarin, an economist with wealth of experience informed the gathered audience that about  70 percentage was only from the formal trade alone; hence the take could certainly be bigger, if the nation’s trading activities is considered alongside, the informal trade aspects of cargo movements, and stressed that the traffic into Nigeria by latest data was over 5,307 ships per annum. 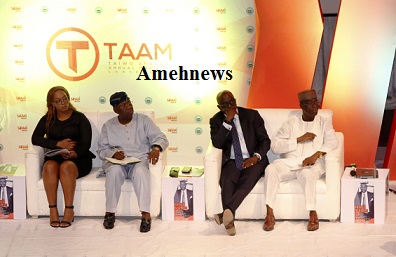 R-L: Major Henry Ajetunmobi (rtd), Executive Director, SIFAX Off Dock and one of the panelists; Dr. Adewale Olawoyin, Lecturer and Staff Adviser, Maritime Forum, UNILAG; Chief Adebayo Sarumi, Former Managing Director, Nigerian Ports Authority and Chairman of the Occasion and Obiageli Obi, Director-General, Nigerian Chamber of Shipping and one of the Panelists; at the third edition of the Taiwo Afolabi Annual Maritime Conference held at the Main Auditorium, University of Lagos on Friday

The Chairman of the event pointed out that though Nigeria actually controls 70 per cent of cargo traffic of West and Central Africa, the lack of political-will has denied the country the full gains and benefits of economy of scale.

“The potential is certainly bigger when we consider the capacity of cargo traffic to Nigeria’s landlocked neighbours up north such as Niger Republic and Chad.

“In real terms, over 85 per cent of all the goods and services that entered Nigeria came through the seaports.

“It is therefore, no doubt that the maritime sector’s performance is indeed a major contributor to the economy and must be given attention when discussing port costs and port charges.

“In 1970, following the end of civil war in Nigeria, government adopted a policy that focused on the need to reconstruct the infrastructure and superstructure of areas that were crucial to the commercial and industrial sectors of the country.

“In order to give effect to the implementation of the policy, importation of building materials was done by about 600 vessels, most of which arrived at the same time and created port congestion,” Folarin said.

He recalled that the available port infrastructure at that time could not handle more than 12 vessels at a time in Apapa Port Complex, which resulted to long queue of ships waiting to berth.

Folarin stated that ship owners incurred huge running costs and this led to demurrage as a result of penalties put in place by the chartered parties, subsequent upon which, towards cutting port cost and charges, the Federal Government initiated a Port reform policy in 1993 through the Federal Ministry of Finance apparently to address the issue of rising costs in the delivery of port services and several others.

However, as encapsulated by NPCC boss, the port concessioning which started in 2006 by transferring operations of public sector activities to private sector in a bid to improve productivity and achieve competiveness at the ports is yet to achieve the desired result, largely as a result of the absence of political-will needed to curb corruption, a menace which has also turned endemic.

“Corruption which is clearly endemic in the port must be challenged”, Folarin posited, recommending that all documentation must be IT compliant, alongside other “Golden Rules”, which must be strongly addressed to achieve the desired change

“Political-will: All agreed processes and terms must be implemented without delay.

“Transparency must be entrenched in the concessioning and port reform process.

“Laws are made to promote port productivity and fair trade and competition and not to create monopolies.

“The landlord model must be administered in the very technical, ethical and objective structure. Concessionaire’s obligations are not to replace the responsibilities of the port authority, a modern productive infrastructure in an element in a LANDLORD MODEL. 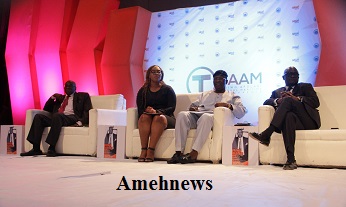 Though the broad objectives of the reform have been hampered by several fundamental issues from conception, implementation process, and operations of the concessioning were regime. The imperative factors are the perquisite installing the concession were side lined for expediency. Therefore, he said port reform is all encompassing and must include the reform of all the key institutions in the port system adding that the challenging which was faced before by port authority from cargo handling operations was enormous.

Port cost is a critical factor in the cost of doing business at the ports and not only port charges which relates to tariffs, levies, and taxes. Computed costs of delays, documentation process, corruption, bureaucracy and lack of political will are some are some of issues that created the problems and will continue to affect the achievement of the objectives.

He however gave some template to serve as road map for successful ports reform going forward as he put it “if the port industry truly deserves to be productive, competitive and earn a hub status in the region. It must reform and stop deluding itself that it’s on course otherwise Nigeria ports will continue to perform at best a little above average.

The colossal growth in traffic, environment and empowerment which we deserve will forever elude Nigeria unless the entire port industry is reformed to meet the performance level of the ports in the sub-region now husbanding Nigeria destination cargo traffic.

There is much more to do to achieve the objectives of building an efficient productive and competitive Ports Environment.  The reforms must start now in an all inclusive way. It must be total. That is the only way, and that is the way forward.”

Kindly Share This Story: The Senate yesterday evening solicited the support of all Nigerian leaders…

Nem Insurance, UBA, Mansard Insurance accounted for 360.623mn shares by volume on the floor of NSE