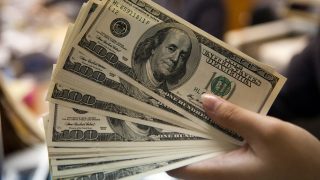 No fewer than 700 Bureau De Change operators have come under threat as purported uncompetitive exchange rate continues to hit their bottom line.

The President, Association of Bureaux De Change Operators of Nigeria, Alhaji Aminu Gwadabe, said the development had rendered the BDCs inactive at the Central Bank of Nigeria foreign exchange window.

This, he added, had put the sustainability of their business under serious threat.

According to Gwadabe, the CBN sells dollars to the BDCs at a higher rate compared to what the regulator sells to commercial banks.

He said the development was affecting their business because both the BDCs and banks were targeting the same market segment and customers.

Gwadabe described the buying rate for the BDCs as uncompetitive and a big disincentive to many forex users to patronise the operators.

He said there was a need for the CBN to begin the sale of forex to both the BDCs and banks at the same rate to enable both institutions to compete favourably.

The ABCON president said, “The CBN should be proactive enough to quickly review the BDC buying rate to ensure effective competition among all the stakeholders. There is no need to give the banks undue advantage over the BDCs as is currently the case based on the level of disparity seen in the dollar buying rate by both sectors. Nothing stops the CBN from ensuring that both the banks and the BDCs buy dollars at the same rate.”

He said the rate challenge faced by the BDCs, if not checked, would trigger a liquidity crisis that might derail the ongoing recovery of the naira against the dollar.

Gwadabe, however, stressed that the BDCs would continue to support the CBN’s determination to achieve exchange rate stability, and strengthen the value of the local currency against the dollar.