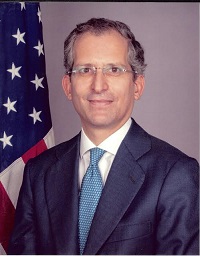 Anthony Luzzatto Gardner, former US Ambassador to the European Union

Anthony Luzzatto Gardner, former US Ambassador to the European Union and Visiting Fellow at the College of Europe, will be the guest speaker at the European Shipping Week Gala Dinner, to be held on Wednesday 1stMarch 2017 at the Steigenberger Wiltcher Hotel in Brussels.

Ambassador Gardner, who has dedicated more than 20 years of his career to US-European affairs, will speak on the important subject of ‘US-EU Relations: Looking Back, Looking Forward’.

Welcoming the news, Patrick Verhoeven, Secretary General of the European Community Shipowners’Associations (ECSA) and Chairman of the European Shipping Week Steering Group, said his speech would be very insightful considering the political developments which have taken place in Europe and the US over recent months. “We are very much looking forward to it,” he said.

European Shipping Week will be held during the week of February 27th – March 3rd, 2017 when shipping industry leaders from Europe and around the world will descend on Brussels to meet and network with top ship owners as well as legislators from the European Commission, European Parliament and the Council of Ministers.

The week‐long series of high level events will bring together the major players in the shipping industry. More information about European Shipping Week 2017 is available at www.europeanshippingweek.com