Comptr Garba disclosed this today Monday after taken members of the press around the two locations of warehouse within Ikeja were the seized items are kept.

The command, also arrested 16 suspects who are currently undergoing interrogations, preparatory to being dragged before a competent court in Lagos for illegally engaging in smuggling.

The Controller has subsequently warned smugglers operating within the Zone, to desist from testing the resolve of  his officers, stressing that their adventures would always result in the forfeiture of their capitals.

Providing a breakdown of the seizures, Uba stated that his officers actually impounded 27 choice vehicles, comprising of Toyota Prado jeep, Toyota Hilux, Toyota Hilander, and Mercedes Benz amongst others, ranging from 2007 to 2013 models respectively. The vehicles alone came with a Duty Paid Value of N228,215,429.

“In the same vein, the unit through our interventions recovered N252,173,201.25 from duty payments and Demand Notices on general goods that tried to outsmart our officers at seaport, airport and border stations through wrong classification, transfer of value and shortchange in duty payment that are meant for federal government of Nigeria making a cumulative sum of N783,649,203 within the weeks under review,” Comptroller Uba Mohammed indicated further, noting that the ban on rice movement through land is still in force.

“For avoidance of doubt, the Federal Government policies banning the importation of rice and vehicles through the land borders are still in force.

“And the Nigerian Custom Service still remains tenacious in its determination to enforce these policies”, the FOU Boss stated, tasking the media to continue to enlighten Nigerians, particularly as we enter the ’ember months’, with their attendant boost in economic activities and boom. 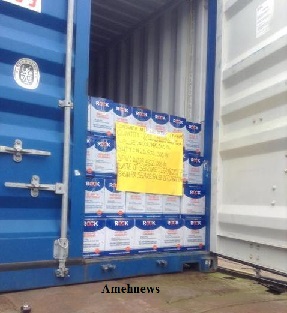 “Let me use this opportunity to send this warning message to smugglers wishing to use South west zone to desist from such illegal trade as we all are well equipped with all necessary arsenal to crippled smugglers and send them out of their illegitimate businesses.

“I urge all compliant traders not to exercise fear while embarking on their legitimate businesses but to be honest in their declarations because as one of the enforcement agencies of government, we will continue to work towards supporting compliance with all extant laws governing imports and exports in Nigeria.

While responding to questions, the Controller noted that the Command  had in the spirit of inter agency collaborations, delivered the seized Indian hemp and medicaments over to NDLEA and NAFDAC for thorough investigation; and commended the Millitary, the police and others for their continuous support to his Command towards curbing crime.

He also added that the Nigerian Customs Service law permit patrol of officers and that if any person or group of persons gathered themselve against officers of customs on duty, such fellow will not be spear by law of the land.