·        Amaechi: Collaboration, Most Valuable Solution to Insecurity in GoG

President Muhammadu Buhari has said the Federal Government remains determined to rid the country’s waters of all forms of criminalities, stressing that with the cooperation of the international community, the entire maritime domain of the Gulf of Guinea (GoG) would be free from piracy. Buhari stated this on Monday in Abuja in his keynote address at the opening of the Global Maritime Security Conference (GMSC). The conference, the first on the GoG, was hosted by the Federal Ministry of Transportation, in partnership with the Nigerian Navy, to find solution to the security issues in the Gulf of Guinea. He said the efforts of the government to fight maritime insecurity were already yielding fruit, quoting statistics by the International Maritime Bureau (IMB) piracy reporting centre. 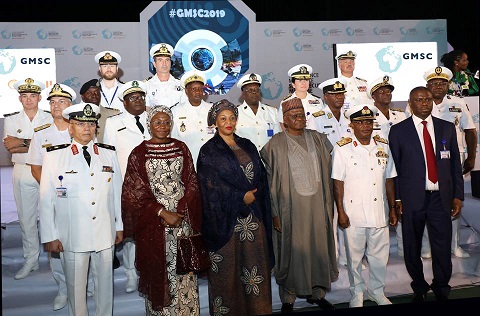 Minister of Transportation Chibuike Rotimi Amaechi said global collaboration was the best answer to the problem of insecurity in the Gulf of Guinea. And Director-General of the Nigerian Maritime Administration and Safety Agency (NIMASA), Dr. Dakuku Peterside, called for intensified global response to the security problems in the Gulf of Guinea.

Noting that there had been a reduction in the rate of insecurity in the Gulf of Guinea (GoG), Buhari stated, “The convening of this timely conference here in Nigeria is an indication that we will not relent in efforts to rid our waters of the piracy scourge. To succeed in our objective, a collective effort from all stakeholders represented here today is essential.”

The President said as Africa proceeded with the second phase of negotiations for the creation of the African Continental Free Trade Area (AFCFTA), safety and security of sea transportation were critical to seamless trade and effective economic integration. “Our approach, therefore, towards the realisation of maritime security in the region and other vital sea lanes is contingent on our collective effort and ability to put in place international, continental, regional and national frameworks and resources in cooperation with critical stakeholders,” Buhari said.

The President noted recent efforts by Nigeria to secure its waters, including the enactment of a standalone antipiracy law, in line with the requirements of the International Maritime Organisation (IMO), the first of its kind in West and Central Africa, ratification of international treaties, and the establishment of an Integrated National Surveillance and Waterways Protection infrastructure.

Buhari also disclosed that the Federal Government was working on a Maritime Transport Plan intended to provide a robust framework for effective maritime transportation in the country.

In his remarks, Amaechi said collaboration was the most valuable solution to the issues of insecurity in the Gulf of Guinea. The minister, who was represented by the Minister of State for Transportation, Senator Gbemisola Saraki, stated, “The most valuable element at the heart of the solution we seek is ‘collaboration and partnership’. I have no doubt in my mind that this conference will push the realisation of the security solution we seek for the Gulf of Guinea and the global shipping community.”

Dakuku, in his welcome address, advocated a more profound global response to the issues of piracy and maritime criminality, saying this is the essence of the conference.

He said, “Nigeria has taken the initiative by convening this global conference to examine the maritime security challenges in the region. Nigeria is keen to drive this initiative because it is a significant destination in the international and domestic shipping map, accounting for over 65% of cargo generated from the Gulf of Guinea region and with rich endowments in oil and gas reserves.” 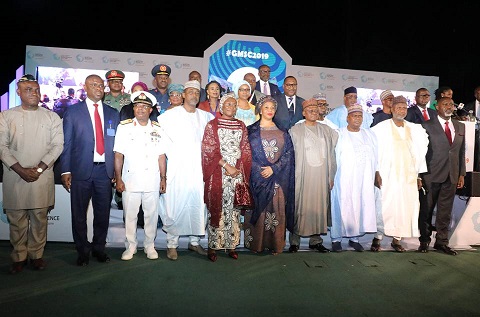 He identified the objectives of the conference to include defining the scope of coordinated regional responses to maritime insecurity vis-à-vis intervention support from external actors and partners, evaluating the relevance and impacts of the various interventions, and moving towards policy harmonisation and practical implementation through regional integration and cooperation as a principal method for delivering effective and efficient security in the region.

“Working together is something that IMO is fully onboard with; together we can team up to deploy resources from all stakeholders in order to comprehensively address maritime insecurity within the region,” he said.