Kindly Share This Story:
“Your Excellency”, Goldberg, has concluded plans for an expanded music talent hunt competition that would encompass Fuji and Juju music under the name Ariya Repete. 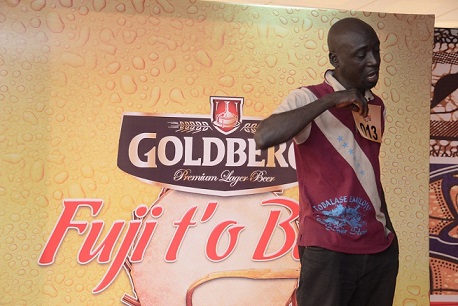 Over the last years, Goldberg has deepened its bond with the people of the South West with its talent hunt competition, Fuji t’o Bam and has now decided to include Juju music, the other indigenous Yoruba music genre in this new and expanded platform, Ariya Repete.
According to Emmanuel Agu, Portfolio Manager, Mainstream Lager and Stout brands, “the brand is using the new platform to extend its drive to discover new talents in the two indigenous Yoruba music genres and the move is in line with its commitment to promote the culture and tradition of the people of South West Nigeria. It is therefore calling on talented young men and women who aspire to become the future stars of Fuji and Juju to enter for the auditions.”
The inclusion of Juju music on the Goldberg music talent hunt platform is also informed by feedback from lovers of the music during last year’s Fuji t’o Bam competition, who called for its addition as some aspiring Juju artistes tried to pass off as Fuji musicians so as to get a chance to contest on the Fuji t’o Bam platform.
With Ariya Repete, Goldberg plans to bring to its consumers the best of both music genres and an unparalleled experience with thirty two contestants from both categories to compete in their respective capacities for a grand prize of One million Naira (N1, 000,000) and a recording deal each.
In view of this, the brand has announced that auditions would commence on April 19th, 2017 in Akure and Ibadan and continue till May 12th, in Ilorin, Ijebu Ode, Oshogbo, Abeokuta, Ado Ekiti and Ile Ife, with the quarter finals slated for June 30th in Akure, Ondo State.
The semi-finals would take place on July 7th in Abeokuta with the grand finale scheduled for July 14thin Ibadan, Oyo State. In the quarter finals, 32 artistes selected from the auditions would be reduced to 10 and this would be further pruned to five for the grand finale in Ibadan. At the grand finale, a winner, each for Fuji and Juju will emerge and would clinch a grand prize of One million naira (N1, 000,000) and a recording deal.