Ayan-Gbayi Group has clinched the grand prize and emerged the overall best drum band at the Excellency Tour in Ado Ekiti held at Prosperious Hotel and Bar on Friday, March 10, 2017. 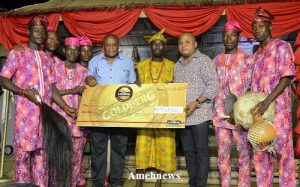 After two breathtaking performances by each band, Ayan-Gbayi emerged the best after a close contest with four other groups and went home with Two Hundred and Fifty Thousand Naira.

Kayode Rahman, leader of the best drum band said the Goldberg Excellency Tour has brought a season of excitement and reward for local talents in Ado Ekiti and expressed appreciation to the brand for supporting traditional acts around the South West with the Tour. According to him, “This is the most rewarding day for us as a band and we cannot hide our excitement for winningthis grand prize.”

Other winning bands expressed their appreciation and welcomed the tour with excitement and looked forward to subsequent editions being bigger and better.

The city of Ado Ekiti was agog with the drummers’ procession which geared the interest of indigenes to the Excellent Nite, where all competing bands thrilled the audience. 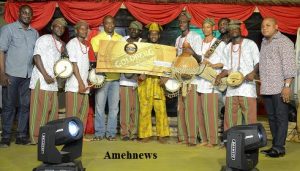 Funso Ayeni, Senior Brand Manager, Regional Mainstream Brands, Nigerian Breweries Plc explained that the Excellency Tour will deepen the brand’s identification with the cultural values of the South West people. He congratulated all contestants in Ado Ekiti and applauded the winners for their efforts in honing their talents and encouraged them to continue with developing their skills which will not only add value to their personal and professional lives, but also help in preserving the Yoruba culture.

He added that the Goldberg Excellency Tour is scheduled for two other cities: Ile Ife and Benin City.

The Goldberg Excellency Tour is coming on the heels of the unveiling of Goldberg Lager Beer as ‘Your Excellency’ in 2016, and it is in line with showcasing the brand and the unique credentials that position it in a class of its own, away from its peers in the market.

Meddy Spa: Your skin tells a lot about you