Kindly Share This Story:
The Gombe State Governor, Muhammadu Inuwa Yahaya says his administration will spare no effort in taking advantage of the renewable energy plan of the Nigerian National Petroleum Corporation, NNPC,  which is designed to boost alternative power supply and biofuel source in the country. 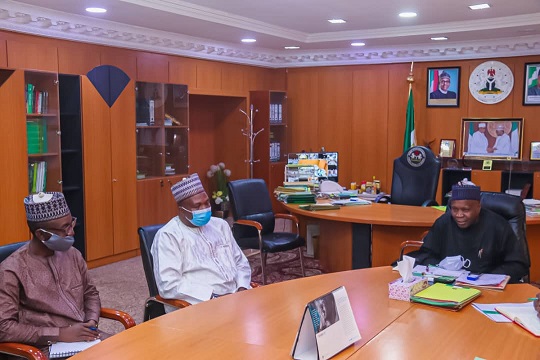 Governor Yahaya stated this when he granted audience to the Group General Manager, Renewable Energy Division of the NNPC, Dr David Balarabe Ture who led a team from the corporation on a tour of designated areas for the sugarcane fuel ethanol project in Gombe State.

Governor Yahaya said the decision by his administration to constitute a committee on the biofuel project was consequent upon his discussions with the former Group General Manager of the Division, which placed him on a vantage position of taking informed decision towards the realization of the project.

He gave the assurances that his administration would work against time and do all its best to see to the actualization of the project in view of its immense benefit to the people of the State.

“And we know that once we are able to do this at least the major thing that is a hindrance to the springing up of industries and commercial activities which is power can be addressed. By the records I got, we could have up to 60 megawatts which will serve not only Gombe but the whole of the Northeast,” said Governor Yahaya.

He welcomed the suggestion that his administration should take a second look at the feasibility study of the project and the Environmental Impact Assessment, EIA.

The Group General Manager, Renewable Energy Division of the NNPC, Dr David Bala Ture, observed that despite the efforts put in place in the last 15 years, there was little or no progress in the actualization of the project in the State.

He, however, commended Governor Yahaya for showing interest and political will to see to its actualization.

“The summary is that normally you need a minimum of 15 thousand hectares which the state has already earmarked up to 20 thousand and I was told an environmental impact assessment and feasibility study were carried out with the soil samples indicating that the land is suitable for the project. The only thing we will do now in the next three months is to validate what has been done,” Mr Ture explained.

He said he would mobilize a team to ensure that a substantial part of the project got started.

The Chairman of the Gombe State Committee on Biofuel project and Commissioner of Justice, Mr Zubair Muhammad Umar, said the state Governor had since allocated twenty thousand hectares of land in response to a request made by the NNPC for the smooth implementation of the project, including the establishment of the factory.

He said his committee had taken the Group General Manager, Renewable Energy Division of the NNPC and his team round the designated areas for the project which, are located in Kupto and Malleri in Funakaye and Kwami Local Government Areas